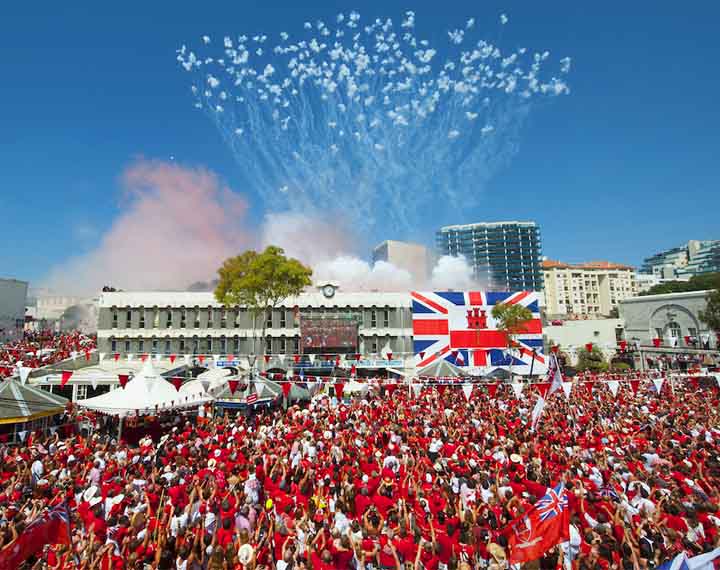 Heroes of Adventure Exclusive Gibraltar National Day VVIP Guides have been dispatched. With so many fabulous events, so much entertainment and live music acts this is the perfect day for the whole family to experience the Gibraltar culture, its historical sites, delicious cuisine and welcoming friendly ambiance. We wish everybody attending a fabulous, fun, and exciting Gibraltar National Day.

Gibraltar National Day, celebrated annually on 10 September, is the official national day of the British overseas territory of Gibraltar. The day commemorates Gibraltar’s first sovereignty referendum of 1967, in which Gibraltarian voters were asked whether they wished to either pass under Spanish sovereignty, or remain under British sovereignty, with institutions of self-government.

The first National Day was so successful that the avalanche of people that spontaneously turned up could not fit into John Mackintosh Square. The Government then took the responsibility of providing some help organising the event, since it fostered the right to self-determination that the Gibraltarians had been demanding at the United Nations since 1963. Therefore, the Government declared the 10 September a public holiday and gave the SDGG a grant for them to administer. In 1993 the venue was changed to the larger Grand Casemates Square.

The official Gibraltar National Day events begin with a children’s fancy dress competition held at the lobby of the Parliament building in Main Street followed by a street party at John Mackintosh Square where food and drink stalls are set up providing Gibraltarian food such as calentita. Later a selected school choir sings songs with a Gibraltar theme, namely Llévame Donde Nací and Virgencita de Europa. This is followed by the main event, the Mayor’s recitation of the names of the recipients of the Gibraltar Medallion of Honour and the reading of the Gibraltar National Day Declaration from atop the City Hall’s balcony. This was previously followed by the traditional release from atop the Parliament building of 30,000 red and white balloons, representing Gibraltar’s population, which had featured on this day since 1992. The balloon release tradition has been ended in 2016 due to the threat that it poses to wildlife, marine wildlife in particular. In the meantime, the school choir leads the general public in the singing of the Gibraltar Anthem.

A funday for children featuring bouncy castles and fairground rides is then held at Grand Casemates Square. There is live music is played all afternoon at Governor’s Parade (the Piazzella) and the Rock on the Rock Club, all free of charge, as opposed to the Gibraltar Music Festival a paid event leading up to national day.

Since 2007, there has been a verbena for the older members of the community. The day culminates with a half-hour-long synchronised fireworks display released from the Detached Mole in the Gibraltar Harbour at night followed by a rock concert.