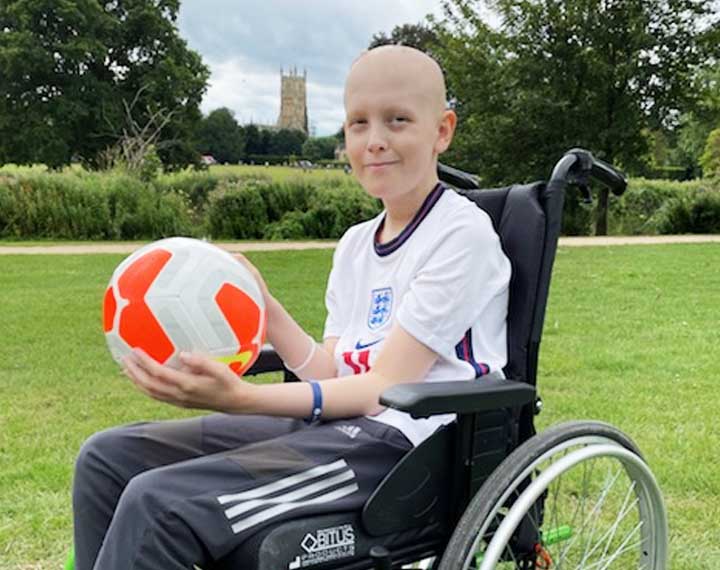 A true, inspiring, and courageous endeavour from “Edward Simpson” 100 Strikes

Edward is raising money for Brain Tumour Research because “we need to find a cure for brain cancers”. 100 strikes is inspired by the determination of Edward Simpson as he kicks his way toward raising £100 k for Brain Tumour Research. Edward launched ‘100 strikes against cancer’ following his own diagnosis and treatment for a brain tumour. He went through multiple operations, high-dose radiotherapy and months of chemotherapy cycles. His courage and strength throughout this ordeal were extraordinary. He never moaned or complained……..but instead focussed on how he could use his own horrific experience to help others. And so 100 strikes was born. Launched on the day of his final operation (August 2021), Edward aims to raise £100 k for Brain Tumour Research through taking 100 penalty kicks at 100 different locations. Sometimes with only jumpers for goal posts……sometimes as half-time kicks at major football grounds, each kick is a major achievement for a boy who came out of surgery unable to walk or talk.

And the sad reality is that Edward’s campaign is needed desperately. Brain cancers are the biggest cancer killers of children and adults under 40, yet historically, only 1 % of national cancer spend has been on this devastating group of diseases. This group of cancers is so under-funded that large amounts of money are required if we are to improve the treatments on offer and help those who will face this diagnosis in the future.

Why 100 strikes? Football helped keep Edward going through his months of Hospital stays. Football was the conversation point, whether with doctors and nurses, family or friends (albeit remotely – Covid prohibited visitors!). Football has also been a driver of Edward’s rehabilitation since he is desperate to get back on the pitch. Football is a community, football is a joy, a shared passion which brings people together, whether young or old, healthy or sick. No matter whether your team won or lost……….you will always have others to talk to about it! And so, it is through his love of football that Edward will achieve his goal.

Team 100 strikes invites all – friends and strangers – to join together to help this cause. Perhaps you simply want to support Edward along his journey through donating or sharing his story – we thank you with all our hearts – every penny raised is needed desperately.

Maybe you can help Ed out by providing a venue for one of his strikes? He would be very grateful!  Or perhaps you fancy taking on your own 100 strikes challenge? 100 strikes is about ‘kids kicking at cancer’ and joining together to fight against brain tumours. Anything with a football could count! Perhaps you are game to attempt 100 keepie uppies? Or how about 100 penalty kicks at your friends? Perhaps you are simply a ‘kid at heart” – age is no barrier! Message us to let us know and we will feature you on our social media platforms. Team 100 strikes invites you to join in the fun and do something good!

Edward’s story in his own words.

Thanks for taking the time to visit my JustGiving page. My name is Edward Simpson.   Last September, I was really excited to be starting in Year 7 at my new Secondary School. Unfortunately however, the Doctors at Gloucestershire Royal Hospital found out that I had a brain tumour and my year turned out to be very different to the one I had expected.

My Mum and I were ambulanced to Bristol Children’s Hospital for an initial operation to relieve the pressure on my brain. This went okay but, unfortunately, a subsequent operation to remove the tumour had to be abandoned whilst I was anaesthetised and on the operating table due to problems with theatre equipment.  It was really traumatic to be brought round to the news that the tumour was still there.  A couple of days later I was sent to Great Ormond Street where the tumour was removed. However, a few hours later, I became unconscious and stopped breathing and so had to have another operation. When I came round I found that I couldn’t talk or move around much at all.  It was very frightening.  At this time we also learnt that my tumour was actually an aggressive brain cancer.

I got myself talking again and, with a lot of help from physiotherapy and occupational therapy teams, managed to take a few steps.  They then sent me back to Bristol where my rehabilitation continued.

Unfortunately, I then had to have some more operations – I have now had 9 different operations, some small, most big.  I also went through 6 weeks of high dose brain and spine radiotherapy with some initial chemotherapy.  Being pinned down by a mask day after day during radiotherapy was pretty scary.  We spent months in Hospital away from my family with only the odd weekend trip home.  Due to Covid, I was only allowed one parent at a time with me in Hospital and my sister has never been able to visit which was really tough.  I then had to have 6 months of intensive chemotherapy cycles which made me really unwell. I had to spend a lot of time in Gloucestershire Royal Hospital in between each chemo cycle due to infections.

This whole experience has been really difficult, not just on me but on my whole family, and we hate to think of anyone going through a similar situation in the future. It was therefore really shocking to learn that, whilst brain cancers are the biggest cancer killers of children and adults under 40, historically, only 1 % of national cancer spend has been on this devastating group of diseases. Sadly, this group of cancers is so under-funded that large amounts of money are desperately needed if we are to improve the treatments on offer.

I am therefore looking to raise money to support research into brain tumours. I have set myself a target of £100 k  This is a huge amount of money and I know that it will take me a while, but I am determined to get there.  I am struggling at the moment as the surgery, radiotherapy and chemotherapy made me so ill that I am still in a wheelchair for much of the time  – but I have decided that this won’t stop me – it’s just another hurdle to overcome.  I am therefore aiming to get myself up and moving about enough to score 100 goals. I really miss playing football! I used to play for Tetbury Town Youth Football Club and am a big supporter of both Manchester United and Forest Green Rovers.  I have sadly lost the chance to play rugby (I also used to play with CRFC), but I am determined to get back on the footy pitch and intend to use this motivation to help me raise money. This fundraising activity marks the beginning of my ‘100 strikes at cancer’. I will keep going, with however many fundraising activities it takes, until I reach my £100 k goal.

Please – if you can donate – however small – I would be really grateful.  Brain cancers are devastating and the treatments are brutal.  We need to find better ways to manage and cure these horrible diseases. I don’t want any other child (or adult) to go through this.  Every penny will help.