Coronation church since 1066, and is the final resting place of 18 monarchs 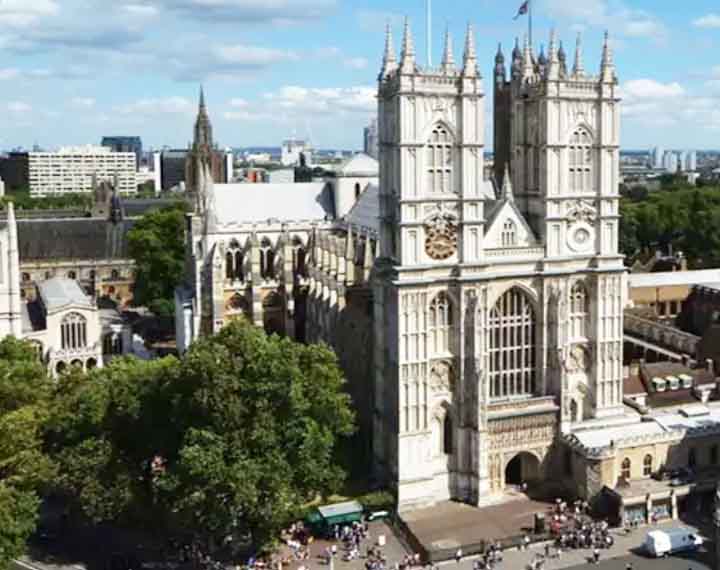 The Abbey has been the coronation church since 1066, and is the final resting place of 18 monarchs. The church we see today was begun by Henry III in 1245. It’s one of the most important Gothic buildings in the country, and has the medieval shrine of an Anglo-Saxon saint at its heart.

Explore a place that’s touched the lives of kings, queens, statesmen and soldiers, poets, priests, heroes and villains since 960AD. Westminster Abbey has been the coronation church since 1066 and is the resting place of more than 3,000 great Britons.

Westminster Abbey, formally titled the Collegiate Church of Saint Peter at Westminster, is a large, mainly Gothic abbey church in the City of Westminster, London, England, just to the west of the Palace of Westminster.It is one of the United Kingdom’s most notable religious buildings and the traditional place of coronation and a burial site for English and, later, British monarchs.

Edward determined that the Minster should not be built in London, and so a place was found to the west of the city, hence it is called “Westminster.” The Westminster Abbey was consecrated on 28 December 1065, but Edward could not attend due to illness. He died on 5 January l066 and was buried in a shrine before the High Altar in his new church. In 1534, King Henry VIII decreed the Act of Submission of the clergy and an Act of Succession followed, together with an Act of Supremacy which recognised the king as “the only supreme head of the Church of England called Anglicana Ecclesia.” In 1540, he dissolved the Benedictine monastery and despoiled Edward’s shrine. Edward’s body was buried in some obscure spot in the Abbey.

In 1557, Mary I restored the shrine with the bones of St Edward the Confessor behind the High Altar. However, the Confessor’s coffin still lies in a cavity in the top part of the marble structure. Since William the Conqueror was crowned in Westminster Abbey in 1066, and, with the exceptions of Kings Edward V (1483) and Edward VIII (1936), all coronations have taken place there. The funeral of Princess Diana was held at the Abbey in September 1997, although she was buried at Althrop, her family home in Northamptonshire. The Westminster Abbey’s formal title is The Collegiate Church of St Peter, Westminster. The popular title Westminster Abbey” continues to be used, even though there have been no monks here since the l6th Century. For the record, there is no inscription in the Abbey dating from 1100 AD that reads “When I was young I thought I could change the world…” even though it is quoted as such in “Chicken Soup for the Soul”.