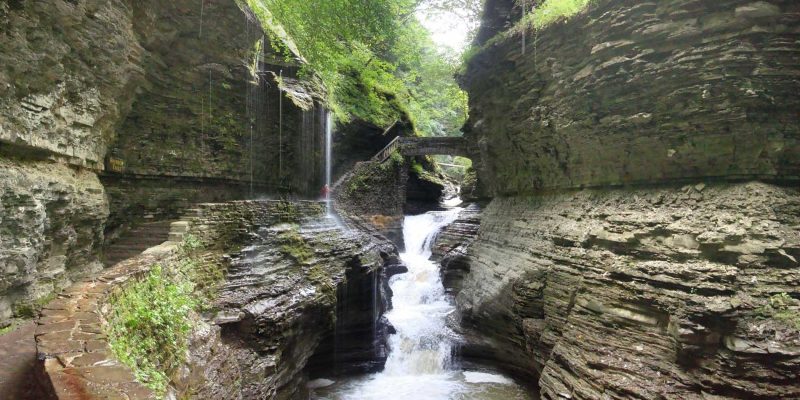 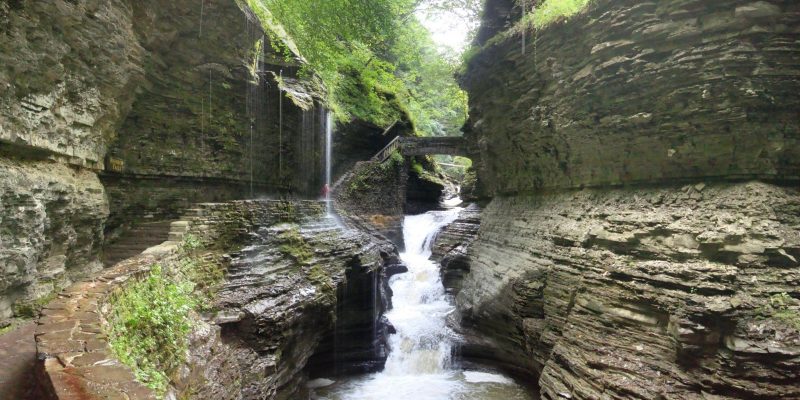 This magnificent park features three trails – open mid-May to early November – by which one can climb or descend the gorge. The Southern Rim and Indian Trails run along the wooded rim of the gorge, while the Gorge Trail .

This magnificent park features three trails – open mid-May to early November – by which one can climb or descend the gorge. The Southern Rim and Indian Trails run along the wooded rim of the gorge, while the Gorge Trail is closest to the stream and runs over, under and along the park’s 19 waterfalls by way of stone bridges and more than 800 stone steps. The trails connect to the Finger Lakes Trail, an 800-mile system of trails within New York state.

Jacob’s Ladder, near the upper entrance to the park, has 180 stone steps, part of the 832 total on the trails. The centre piece of the 778-acre park is a 400-foot-deep narrow gorge cut through rock by a stream – Glen Creek – that was left hanging when glaciers of the Ice age deepened the Seneca valley, increasing the tributary stream gradient to create rapids and waterfalls wherever there were layers of hard rock. The rocks of the area are sedimentary of Devonian age that are part of a dissected plateau that was uplifted with little faulting or distortion. They consist mostly of soft shales, with some layers of harder sandstone and limestone.

Watkins Glen State Park is located outside the village of Watkins Glen, south of Seneca Lake in Schuyler County in New York’s Finger Lakes region. The park’s lower part is near the village, while the upper part is open woodland. It was opened to the public in 1863 and was privately run as a tourist resort until 1906, when it was purchased by New York State. Initially known as Watkins Glen State Reservation, the park was first managed by the American Scenic and Historic Preservation Society before being turned over to full state control in 1911. Since 1924, it has been managed by the Finger Lakes Region of the New York State Office of Parks, Recreation and Historic Preservation.