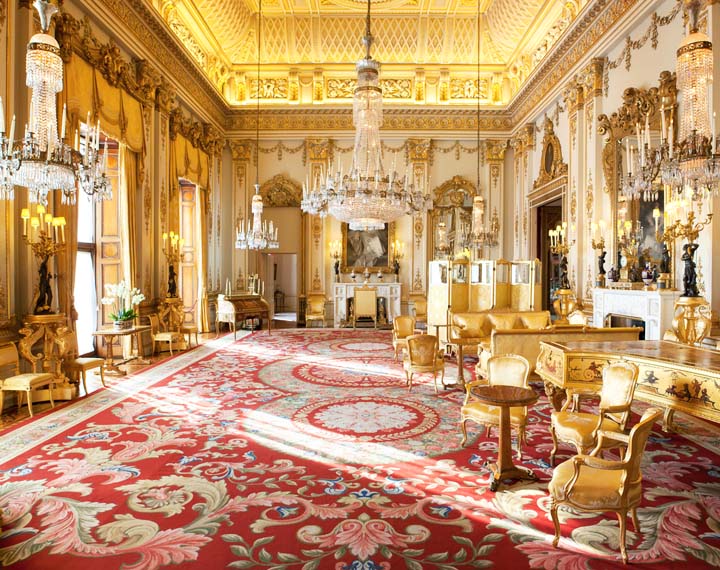 The term ‘State Rooms’ is applied to those rooms that were designed and built as the public rooms of the Palace, in which monarchs receive, reward and entertain their subjects and visiting dignitaries. Today the State Rooms at Buckingham Palace are used extensively by The Queen and members of the Royal Family to receive and entertain their guests on State, ceremonial and official occasions.

The Palace’s nineteen State Rooms predominantly reflect the taste George IV (r.1820-30), who commissioned the architect John Nash to transform what had previously been known as Buckingham House into a grand palace. Many of the pieces of furniture, sparkling chandeliers, candelabra and other works of art in these rooms were bought or made for Carlton House, George IV’s London home when he was Prince of Wales. Today the State Rooms are furnished with many of the greatest treasures from the Royal Collection, including paintings by Van Dyck and Canaletto, sculpture by Canova, exquisite pieces of Sèvres porcelain, and some of the finest English and French furniture in the world.

Many of the other State Rooms also have particular uses today. It is in the Throne Room, for example, that The Queen, on very special occasions like Jubilees, receives loyal addresses. On 29 April 2011 this room was the setting for the formal photographs following the wedding of The Duke and Duchess of Cambridge. In the Music Room, guests are presented to The Queen, The Duke of Edinburgh and the visiting Head of State on the occasion of a State visit. The White Drawing Room, perhaps the grandest of all the State Rooms, serves as a royal reception room for The Queen and members of the Royal Family to gather before official occasions.