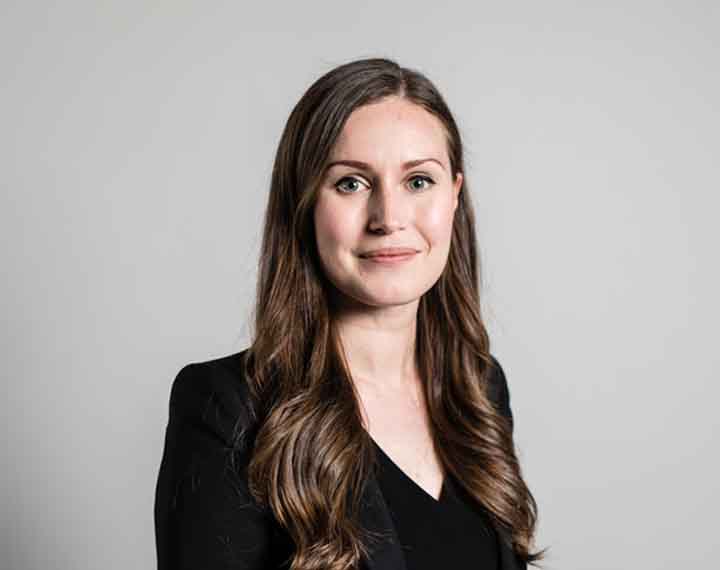 Sanna Marin was born in Helsinki on 16 November 1985. She spent her childhood in Pirkkala and now lives in nearby Tampere with her husband and their daughter Emma (b. 2018).

Having completed her general upper secondary education in 2004, Marin took a Master’s degree in Administration Sciences at the University of Tampere in 2017. Her Master’s thesis, entitled ‘Finland, a country of Mayors’, looked into the professionalisation process of political leadership in Finnish cities.

In 2015, Marin was elected to Parliament for her first run. There she has been member of the Grand Committee, Legal Affairs Committee and Environment Committee. She is member of Tampere city council, which she chaired in 2013–2017.

Marin has been actively engaged in politics since 2006. “Being involved and making a difference represent civil rights for me. Changing things takes commitment. The welfare state or the ground rules for working life should not be taken for granted; they are the result of hard work and determined efforts.”

Environmental values are also close to Sanna Marin’s heart: “Climate change and loss of biodiversity are some of the biggest problems of our times. Addressing them takes strong political will and determination.”

During the government formation talks in spring 2019, Marin chaired the negotiating table that addressed the theme ‘Carbon neutral Finland that protects biodiversity’. She served as Minister of Transport and Communications in the Rinne Government.