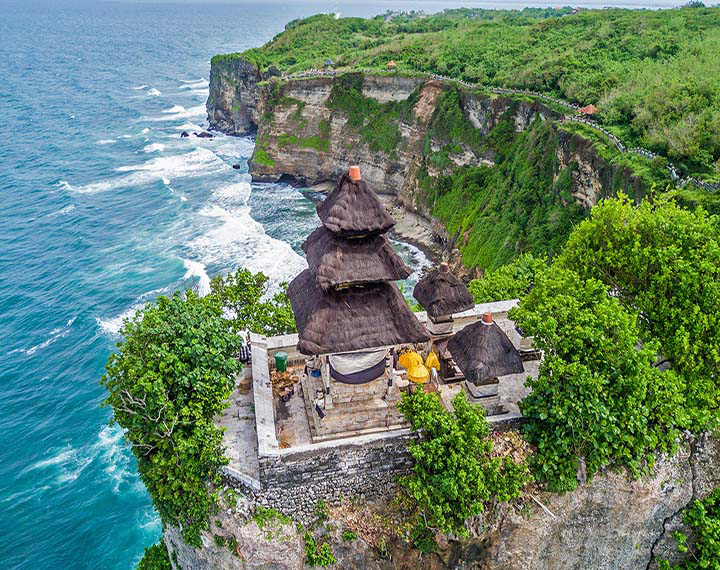 Uluwatu Temple is a Balinese Hindu sea temple located in Uluwatu. The temple is regarded as one of the sad kahyangan and is dedicated to Sang Hyang Widhi Wasa in his manifestation as Rudra. This is one of Bali’s nine key directional temples and one of the most spectacular ones in the entire island, perched on top of a steep cliff approximately 70 metres above sea level.

Uluwatu Temple has a unique architecture with palm-frond black roof stacked into the black. The most impressive thing that anyone sees Uluwatu temple are also amazed prime location, precariously between heaven and earth.

The temple (pura in Balinese) is built at the edge (ulu) of a 70-meter-high (230 ft) cliff or rock (watu) projecting into the sea. In folklore, this rock is said to be part of Dewi Danu’s petrified barque.

Though a small temple was claimed to have existed earlier, the structure was significantly expanded by a Javanese sage, Empu Kuturan in the 11th Century. Another sage from East Java, Dang Hyang Nirartha is credited for constructing the padmasana shrines and it is said that he attained moksha here, an event called ngeluhur (“to go up”) locally. This has resulted in the temple’s epithet Luhur.