Our vital work never stops. We work 24 hours a day 7 days a week to help protect the UK 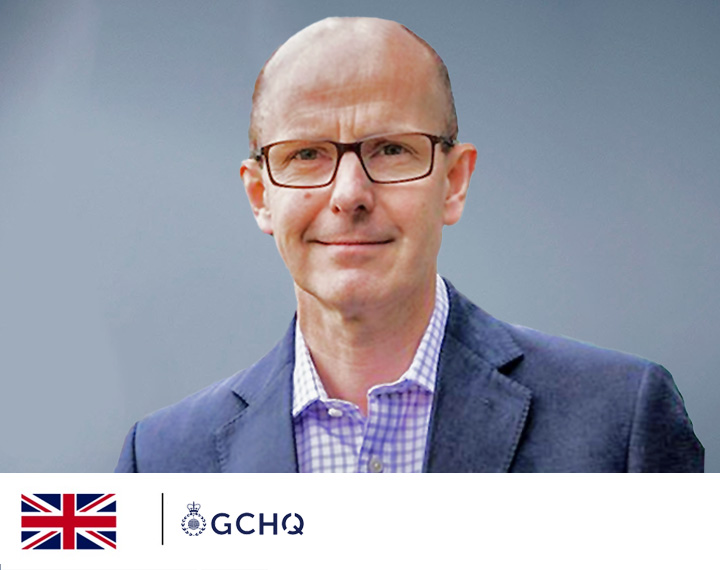 Sir Jeremy Fleming is the Director of GCHQ, the UK’s Intelligence, Cyber and Security Agency. He was appointed in 2017 and is the 16th person to hold the role. After an early career in the financial sector, Jeremy joined MI5 in 1993. He gained extensive operational, investigative and leadership experience across the full range of national security work. He helped shape MI5’s response to the London terrorist attacks in 2005, led the revision and publication of the Government’s counter-terrorism strategy, CONTEST, and was promoted to Assistant Director General to lead MI5’s preparations for the London 2012 Olympics. He then spent four years as Deputy Director General with responsibility for all investigations and operations.

In GCHQ, Jeremy has overseen the creation of the National Cyber Security Centre with a mission to make the UK the safest place to live and do business online. It has become a world leader in bringing together Government, industry and international partners to address cyber threats and inform the public. Jeremy has led a significant period of growth in the Agency, with the development of a strategic base in Manchester and a focus on diversity and inclusion. In 2019 he led GCHQ’s centenary celebrations with the publication of a landmark official history. And in 2020, a new partnership with the MoD was announced to create a National Cyber Force charged with delivering cyber operations.

Jeremy was made a Companion of the Order of Bath in 2016 and Knight Commander of the Order of St Michael and St George (KCMG) in 2021 for services to national security. He is also Honorary Colonel of JSSO(V). He holds a degree in Economic and Social History from the University of Bristol and is a Fellow of the Institute of Chartered Accountants and of the Institute of Engineering and Technology. In November 2021, Jeremy received an Honorary Doctorate of Science by the University of Gloucestershire in recognition of his distinguished career and the important social and economic contribution that GCHQ makes to Gloucestershire.

During The Great War the station’s role was to monitor the German High Seas Fleet which was making harassing attacks on the East Coast of England. Following the cessation of hostilities in 1918, Scarborough’s mission widened to include diplomatic communications, with resources eventually being evenly split between Naval and diplomatic intercepts.

In 1932, a proposal was made to close Scarborough, and to transfer operations to Flowerdown, Hampshire; fortunately this decision was reversed and in 1935 our interception of the German Navy was restarted.

1936 to 1945 At the beginning of August 1939, Y Service, the organisation responsible for intercepting enemy and neutral radio transmissions, were prepared for war. Scarborough intercepted German Naval and Naval Air communications, and controlled a Direction-Finding network.

It was during this period that the civilians working in Sigint for the Admiralty became known as the Admiralty Civilian Shore Wireless Service (ACSWS), and the complement soon became a mix of both civilian and service personnel, augmented during the war years by members of the Women’s Royal Naval Service.

During May 1941, the station at Scarborough played a key role in the location and subsequent destruction of the German battleship Bismarck. The following is an extract from a review of ‘Y Work’, written by Lt. Cmdr. WR Rodger, Officer in Charge, Scarborough, 15 November 1945: ‘The old Y Station in Sandybed Lane (1914-1943) was altered out of recognition to meet increasing demands in equipment and the need for more personnel and space, particularly necessary for aerials and the servicing of [Wireless Telegraphy] apparatus. The buildings on the present site on Scarborough Racecourse were occupied on 1st March 1943 during the course of a forenoon watch, without a stoppage of [Wireless Telegraphy] cover or passing of [Enigma] traffic to Bletchley Park.’

As indicated above, the station moved to its present location (some three miles from the town centre on the site of the old Scarborough racecourse) in early 1943. A half-buried bomb-proof bunker covered in hundreds of tons of earth served as the main building at the site. The working conditions in the bunker were far from ideal. Space, heating and water supplies were inadequate, and rainwater would seep into the building. In 1945 our next major task was the collection of Soviet Armed Forces communications during the period of the Cold War, and Scarborough became the main station for the interception of Russian Naval traffic.

In 1965 it was agreed that the station and the ACSWS should be transferred to GCHQ, which formed the Composite Signals Organisation to unify the civilian stations subordinate to different ministries and the station became CSOS Irton Moor. Work on the present building began in 1972, and all operations had transferred from the bunker by 1974. The fall of the Iron Curtain in the early 1990s resulted in the reduction of the UK’s interception. The missions of our sister stations at Cheadle and Culmhead were transferred to Scarborough in 1995 and 1998 respectively. In July 2001 the site was renamed GCHQ Scarborough. The site was transferred to GCHQ ownership in 1965.