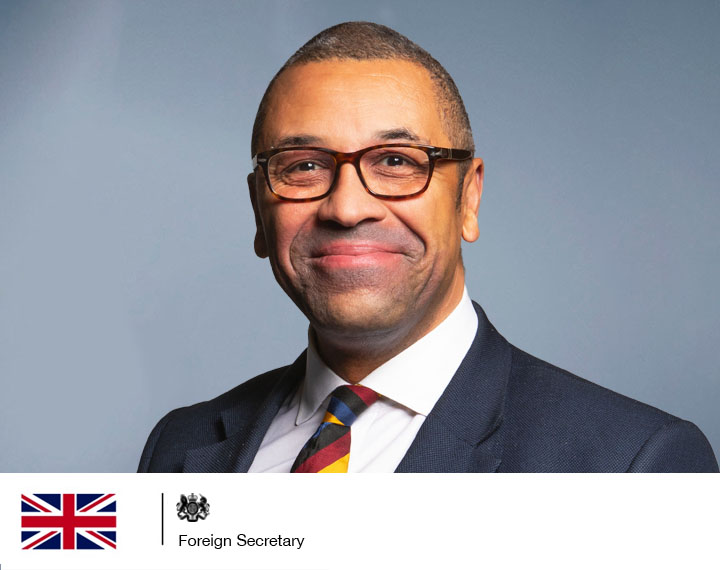 James Cleverly was appointed Secretary of State for Foreign, Commonwealth and Development Affairs on 6 September 2022.

He was previously appointed Secretary of State for Education from 7 July 2022 to 6 September 2022.

He was previously appointed Minister of State (Minister for Europe and North America) in the Foreign, Commonwealth & Development Office (FCDO) from 8 February 2022 to 7 July 2022.

He was previously Minister for Middle East and North Africa at the FCDO. James was first appointed as a joint Minister of State in the Foreign & Commonwealth Office and the Department for International Development on 13 February 2020. He was first elected as the Conservative MP for Braintree in May 2015.

James was Minister without Portfolio from 24 July 2019 to 13 February 2020 and Parliamentary Under Secretary of State at the Department for Exiting the European Union from April 2019 to July 2019.

The Foreign Secretary has overall responsibility for the work of the Foreign, Commonwealth & Development Office, with a particular focus on:

More about this role

We pursue our national interests and project the UK as a force for good in the world. We promote the interests of British citizens, safeguard the UK’s security, defend our values, reduce poverty and tackle global challenges with our international partners. FCDO is a ministerial department, supported by 12 agencies and public bodies.

These services are now provided by FCDO:

FCO was a ministerial department from October 1968 to September 2020. It merged with the Department for International Development to create FCDO.