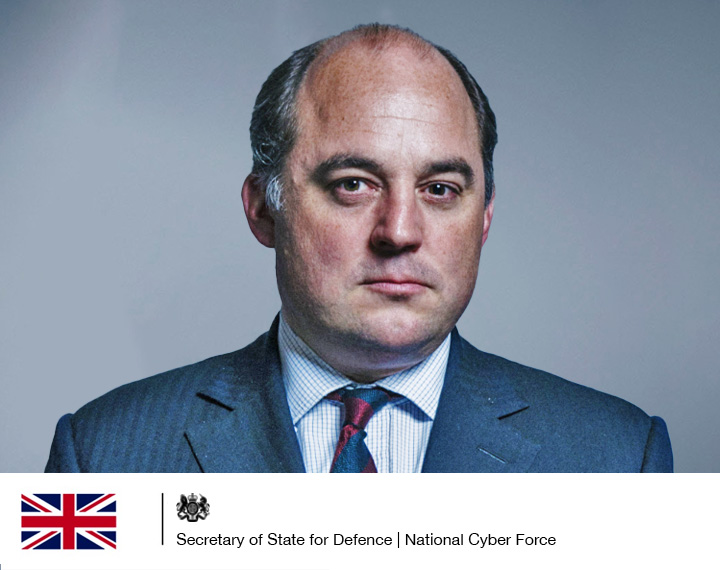 Ben Wallace was appointed Secretary of State for Defence on 24 July 2019. We work for a secure and prosperous United Kingdom with global reach and influence. We will protect our people, territories, values and interests at home and overseas, through strong armed forces and in partnership with allies, to ensure our security, support our national interests and safeguard our prosperity. MOD is a ministerial department, supported by 25 agencies and public bodies.

The National Cyber Force (NCF) is a partnership between defence and intelligence. It is responsible for operating in and through cyberspace to counter threats, disrupting and contesting those who would do harm to the UK and its allies, to keep the country safe and to protect and promote the UK’s interests at home and abroad. In addition to GCHQ and the Ministry of Defence, the Secret Intelligence Service and the Defence Science and Technology Laboratory are core partners bringing cutting edge espionage and research techniques.

Ben first entered politics as a Member of the Scottish Parliament in 1999. Following a move to Lancashire, he was elected to the UK House of Parliament in 2005. His first job in Government was as Parliamentary Private Secretary to the Veteran Cabinet Minister the Rt. Hon Ken Clarke QC, as Justice Secretary. He has served as a whip, the Northern Ireland Minister and lastly the UK’s longest serving Security Minister.

In 2008, he was awarded ‘Campaigner of the Year’ by The Spectator after leading calls for improved transparency and the reform of parliamentary expenses. He was elected the Conservative MP for Wyre and Preston North in May 2010, and formerly MP for Lancaster and Wyre in 2005. Ben Wallace was Minister of State for Security at the Home Office from 17 July 2016 to 24 July 2019. He was in position during the terror attacks of 2017 and the Russian State attack in Salisbury in 2018.

After school Ben worked as a ski instructor in Austria before starting a career in the armed forces. On completing Sandhurst he was commissioned as an Officer into the Scots Guards. During the 1990s he saw service in Northern Ireland, Germany, Cyprus and Central America. He was mentioned in dispatches in 1992.