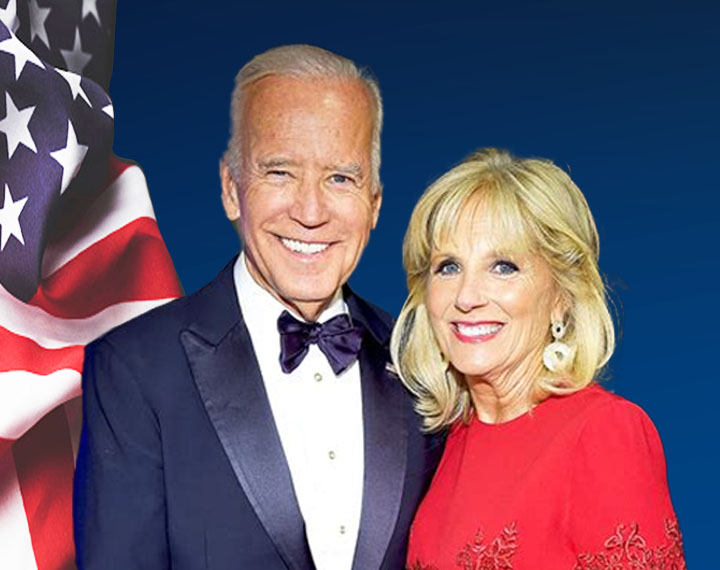 Joseph Robinette Biden Jr. is an American politician who is the 46th and current president of the United States. A member of the Democratic Party, he served as the 47th vice president from 2009 to 2017 under Barack Obama and represented Delaware in the United States Senate from 1973 to 2009.

Jill Biden, Ed.D., is the First Lady of the United States, a community college educator, and bestselling author. Dr. Biden also served as Second Lady of the United States from 2009–2017. Jill Tracy Jacobs Biden was born on June 3, 1951, in Hammonton, New Jersey, to Bonny Jean Godfrey Jacobs and Donald Carl Jacobs. The oldest of five daughters, she grew up in Willow Grove, Pennsylvania, just outside of Philadelphia. She graduated from Upper Moreland High School in 1969, then graduated from the University of Delaware with a bachelor’s degree in English in 1975.

In 1976, Jill Biden began teaching English at St. Mark’s High School in Wilmington. She then became a reading specialist at Claymont High School. At that time, she was also pursuing a Master of Education with a specialty in reading from West Chester University. She completed her first master’s degree in 1981.  In 1975, she met then-Senator Joe Biden. They married at the United Nations Chapel in New York City in 1977 and she became the mother of his two sons, Beau and Hunter. Their daughter, Ashley, was born in 1981. Jill Biden taught English at Rockford Center psychiatric hospital while also pursuing a Master of Arts in English from Villanova University. In 1993, she accepted a job at Delaware Technical Community College. In 2007, she received a Doctor of Education (Ed.D.) in educational leadership from the University of Delaware. When Joe Biden became Vice President and the Bidens moved to Washington, DC, Dr. Biden continued her career at Northern Virginia Community College, teaching throughout their eight years in office.

The White House is the official residence and principal workplace of the President of the United States, located at 1600 Pennsylvania Avenue NW in Washington, D.C. It has been the residence of every U.S. president since John Adams in 1800. The term White House is often used to refer to actions of the president and his advisers, as in “The White House announced that…”.

The residence was designed by Irish-born architect James Hoban in the Neoclassical style. Construction took place between 1792 and 1800 using Aquia Creek sandstone painted white. When Thomas Jefferson moved into the house in 1801, he (with architect Benjamin Henry Latrobe) added low colonnades on each wing that concealed stables and storage. In 1814, during the War of 1812, the mansion was set ablaze by the British Army in the Burning of Washington, destroying the interior and charring much of the exterior. Reconstruction began almost immediately, and President James Monroe moved into the partially reconstructed Executive Residence in October 1817. Exterior construction continued with the addition of the semi-circular South portico in 1824 and the North portico in 1829.