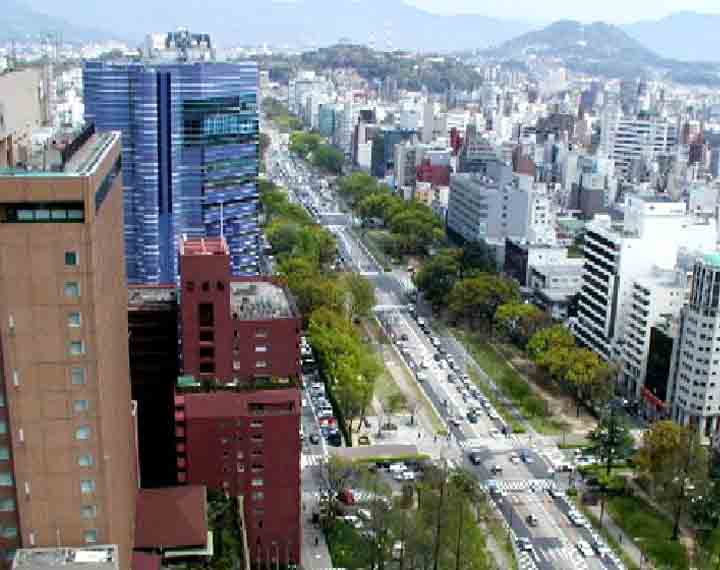 Peace Boulevard is one of the main streets in Hiroshima, Japan, which faces the south side of Hiroshima Peace Memorial Park. The street is 100 metres (330 ft) wide and runs 3.6 kilometres (2.2 miles) from east to west, between Tsurumi-cho and Fukushima-cho within the green belt .

The 4km east-west boulevard cuts across the center of the city of Hiroshima and has been selected alongside Hiroshima Peace Memorial Park as one of the Top 100 urban views in Japan. Large scale events are also held on the street such as festivals and illumination.

Peace Boulevard is an important symbol for Hiroshima, which was constructed based on the Hiroshima Peace Memorial City Construction Plan enacted in 1952. The major elements of the street are four traffic lanes in the middle and two green belts on both sides. The green belts extend to about 4km. Most of the trees planted on the green belts were presented by the people around Hiroshima between 1957 and 1958.

Peace Boulevard is also called ‘100 Meters RoadÍ due to its width. Although 24 100-meter-wide roads were planned in some cities damaged during the war, only two in Nagoya and one in Hiroshima have actually been constructed.

Because most part of the street is located in central Hiroshima, it is accessible on foot or by transit. Thus many commuters and inhabitants use this road as major movement route.

The green belts provide place where people can relax. Nearby office workers and tourists often take a rest under the trees in the green belts. The green belts are regularly maintained, and it is always kept neatly.

Every year, the number of people who visit at the festival amounts to around 1.5 million. Peace Boulevard is usually used by nearby office workers and local residents, but when there is a special event, people gather from various places, and many people interact with each other. On every Sunday, morning market selling local farm products is held and is full of various people.

For three days of the beginning of May, the street becomes a vehicle-free promenade, and the Flower Festival is held. During the festival, Peace Boulevard is decorated with many kinds of flowers. And in green belts, various concerts and exhibitions are held.