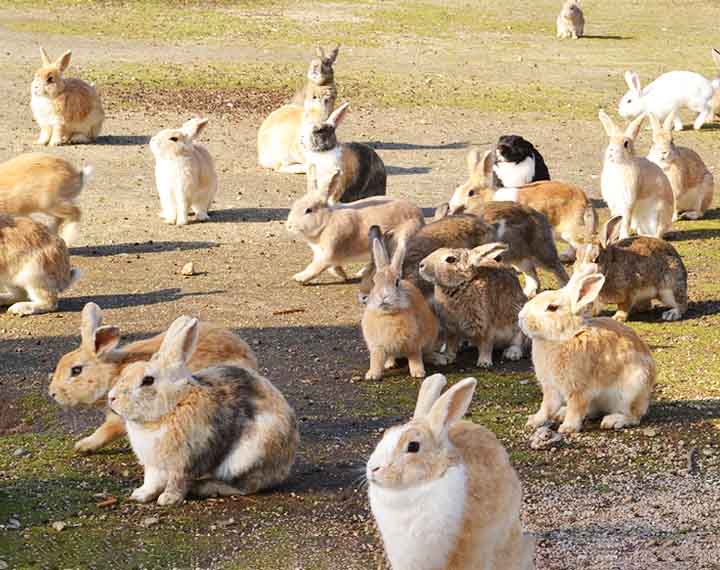 Ohkunoshima is an island in the Seto Inland Sea off of the coast of Tadanoumi Port. It is the only place in the world where visitors can wander freely among wild rabbits. Originally there were only a few rabbits on the island, but over the years, the number of rabbits has increased to over 900.

In recent years, Ohkunoshima has become one of the most popular tourist destinations in Hiroshima prefecture, attracting visitors from around the world. Last year over 300,000 people visited the island. We recommend that you stay overnight on the island at the Kyukamura Hotel to enjoy spending time among the rabbits because are especially active in the morning and evening.

Known today as “Rabbit Island”, Ohkunoshima has a dark history when it was the site of facilities for the Imperial Japanese Army during the first half of the 19th century. Erased from maps of the time because of the classified nature of its activities, Ohkunoshima was the location of a military fortress during the Russo-Japanese War of 1905, factories that made poison gas during World War II, and an ammunition depot during the Korean War.

Today the ruins of these facilities, covered with ivy and weathered by time, wind, and rain, sit silently as fascinating markers of these turbulent times. Most visitors to the island are unaware of these sites until they arrive on Ohkunoshima, and it is thanks to the popularity of “Rabbit Island” that the island’s tragic history can be told.