Relive the history of Mazda, which has produced many iconic models 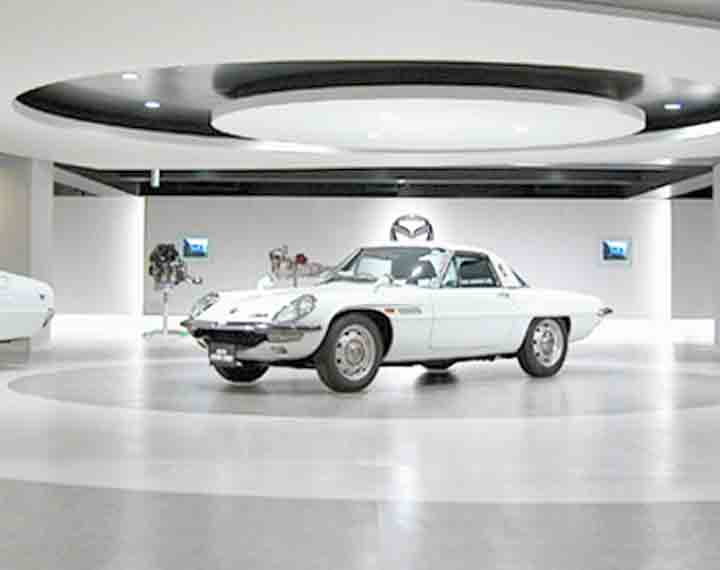 Relive the history of car making at Mazda, which has produced many iconic models. For an even more exciting experience, please visit the Mazda Museum at our Hiroshima Head Office.

Mazda’s founder, Jujiro Matsuda, devoted his life to technology and manufacturing. At age 13, he apprenticed away from home with a blacksmith in Osaka, followed by jobs at various large plants and munitions factories around Japan in pursuit of ever more advanced technology. Jujiro’s unwavering passion for manufacturing and his strong, independent spirit would eventually lead him to the machinery and automobile industries. Mazda’s dedication to perfecting our trade began with Jujiro.

When Toyo Kogyo expanded into the passenger vehicle market, the company developed its “pyramid vision” product strategy, an expanded, strategic lineup with light vehicles comprising the base and luxury sedans at the top. A range of commercial vehicles, from light trucks to mid-sized trucks, were developed. They mainly used aluminum alloy inline four-cylinder engines, while also beginning to employ rotary engines, called “the dream engine,” through technology alliances with NSU and Wankel in Germany.

Through a technology alliance with Perkins in England, diesel engines were also developed. In just 10 years, Toyo Kogyo had grown from a three-wheeled truck manufacturer to a general automobile manufacturer with a diverse lineup of vehicles and engines.

Public demand for cars that were safe, had low emissions, and saved resources quickly increased in the 1970s. Toyo Kogyo made it through the second oil crisis and took advantage of global demand for small, light cars to quickly develop its overseas business. In 1979, Toyo Kogyo entered a capital alliance with Ford, expanding the supply of completed vehicles and transmission parts for the American automaker. In order to respond to increased production volume, a new plant was constructed in Hofu, Yamaguchi Prefecture. At the same time, the company introduced “corporate identity,” then a novel concept in Japan, standardizing the company’s visuals by determining a logo and company color. In 1984, the company name and brand name were aligned to “Mazda Motor Corporation.”

Mazda began participating in motor sports with touring car races in the 1960s. Starting in Asia, before long our vehicles were entering European and North American races, including global rallies such as Le Mans and IMSA. Mazda’s rotary engine, embodying our unflagging challenger spirit, played a major part. It was our mission to demonstrate the durability and outstanding performance of our unique technologies, the pride of Mazda, on the world’s biggest stages.