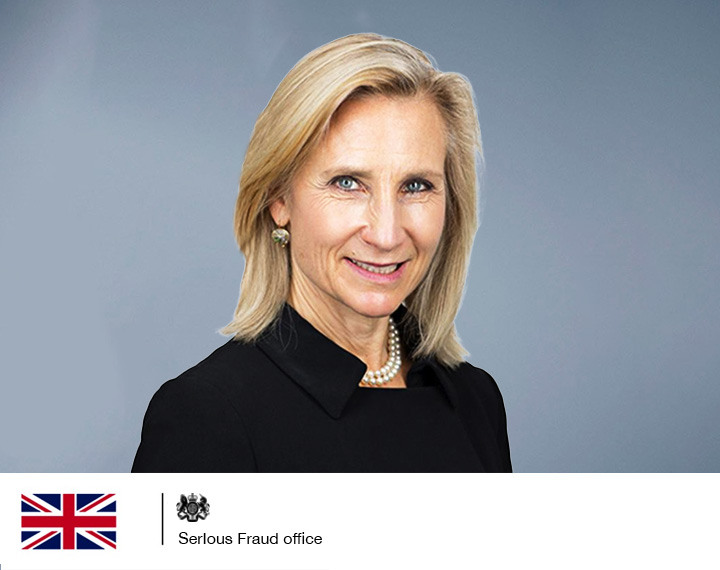 Lisa Osofsky became Director of the SFO on 28 August 2018. A dual US/UK national, Lisa has over 30 years’ experience pursuing and protecting against financial crime, in both the public and private sectors. She began her career working as a US federal prosecutor, taking on white collar crime cases including defence contractor and bank frauds, money laundering and drug related conspiracies. She spent five years as Deputy General Counsel and Ethics Officer at the FBI and was seconded to the SFO whilst a Special Attorney in the US Department of Justice’s Fraud Division. She was also called to the Bar in England and Wales.

Lisa has worked for Goldman Sachs International as their Money Laundering Reporting Officer and spent seven years in the Corporate Investigation Division of Control Risks, where she advised on compliance issues. Prior to joining the SFO, Lisa worked for Exiger, a global governance, risk and compliance advisory firm, where she served as Regional Leader and Head of Investigations for Europe, Middle East and Africa.

The SFO is a specialist prosecuting authority tackling the top level of serious or complex fraud, bribery and corruption. We are part of the UK criminal justice system covering England, Wales and Northern Ireland, but not Scotland, the Isle of Man or the Channel Islands. We take on a small number of large economic crime cases. The Director may investigate any suspected offence which appears to her on reasonable grounds to involve serious or complex fraud, bribery or corruption.

In considering whether to authorise an investigation the Director will take into account the actual or intended harm that may be caused to:

and whether the complexity and nature of the suspected offence warrants the application of the SFO’s specialist skills, powers and capabilities to investigate and prosecute. We also pursue criminals for the financial benefit they have made from their crimes and assist overseas jurisdictions with their investigations into serious and complex fraud, bribery and corruption cases. Since 30 September 2017 we have had the power to investigate and prosecute the new offence of corporate failure to prevent the facilitation of overseas tax evasion.

We are unusual in the UK in that we both investigate and prosecute our cases. We were set up this way because these kinds of cases are complicated and lawyers and investigators need to work together from the beginning. The SFO was created and given its powers under the Criminal Justice Act 1987 and was established in 1988. Read more about our history and powers here. The SFO is superintended by the Attorney General in accordance with a protocol which sets out the relationship between the Attorney and the Law Officers’ Departments.