Hindu god part man and part bird, symbolizes the power of the sun and is known for slaying evil serpents 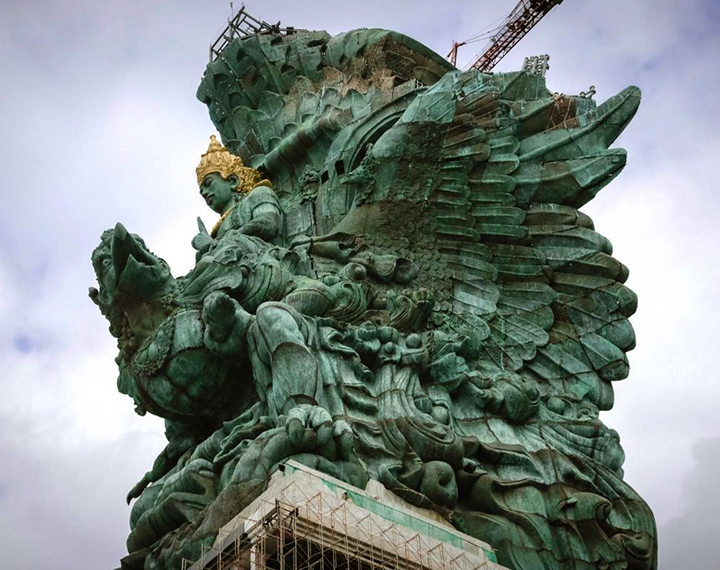 Garuda, the Hindu god who is part man and part bird, symbolizes the power of the sun and is known for slaying evil serpents. In art he usually appears as the mount or vehicle of Vishnu. Here Garuda carries Krishna, an avatar of Vishnu, who not only has borrowed Vishnu’s mount but also holds his war discus (chakra). He stands energetically astride Garuda’s head and shoulders, and with the index finger of his open left hand makes a warning gesture. Legend tells us that on many occasions Krishna rode out on the back of Garuda to do battle. In a tale well known to the Javanese, Garuda stole the elixir of immortality from the gods, who had thought it was well protected by two poisonous serpents from the realm of the gods. Here he holds the two defunct serpents—the head of one is missing—and balances the elixir in a jar on his head. The folded position of Garuda’s legs suggests that he is rising in flight. His short wings beat the air, and his long tail streams behind him in openwork loops. The curves and lively projections of all the other shapes and details of this bronze make the figures appear to be charging through space.

This ensemble was part of a hanging oil lamp. Above Krishna’s head is a lotus pattern to which a chain for suspension was attached, and beneath Garuda is a loop from which a cup for lamp oil would have hung. The lighted lamp would cast shadows of the god and his vehicle.