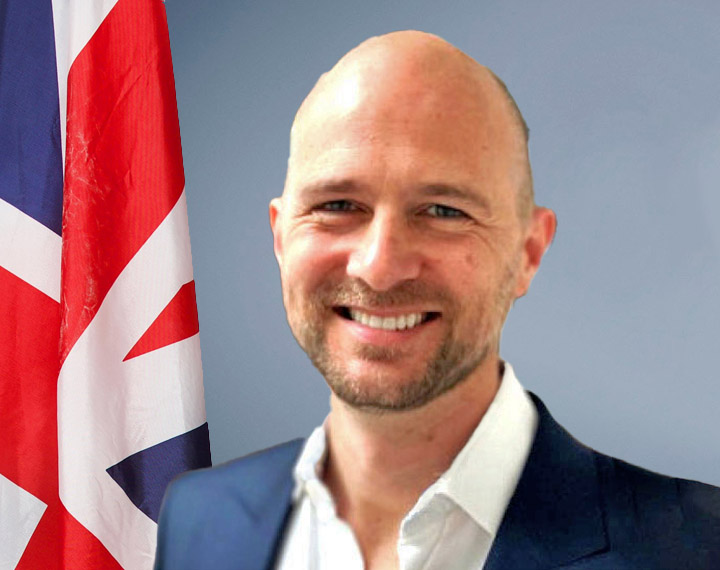 Joe White MBE worked previously as a Silicon Valley-based entrepreneur and investor. He has served as General Partner of Entrepreneur First, a Greylock backed early-stage deep tech fund for which he’s raised and run $200m of funds; co-chair of GBx, a curated network of British entrepreneurs; a non-executive director for the UK’s Behavioral Insights Team where he advised on social impact technology products; and a former co-founder of Moonfruit.com, a website and e-commerce platform hosting 7m sites, which he exited in 2012. He received an MBE from HM Queen in 2017 for Services to Technology Businesses. Follow Joe on Twitter @JoeWhiteUK

The Consul General is the senior UK official in a Consulate General, which is a subordinate office to the Embassy or High Commission, usually located in another major city. The Consul General represents the UK government and is typically responsible for consular, visa and trade activities in their city or region. This combined role will lead the Consulate, manage relationships in the northwest of the US, support the Ambassador on areas of shared UK-US interest including technology and entrepreneurship, and support the HM Trade Commissioner in promoting and enhancing the UK as a partner of choice in trade, investment, and research and development.

The British Consulate General in San Francisco maintains and develops relations between the UK and the USA.  Our work involves handling a wide range of political, commercial, cultural, security and economic interests to the UK and our region. We provide services to British nationals living in and visiting Northern California, Alaska, Idaho, Montana, Oregon, Washington and Wyoming. The UK Government Office in Seattle works to promote business, economic and political ties with Washington State. Consular issues, such as emergency travel documents and support for British nationals, are managed by the British Consulate General in San Francisco.

If you’re traveling in the USA, see our USA Travel Advice about coronavirus (COVID-19). See also our coronavirus travel advice for all our latest guidance on travel during coronavirus. If you’re in San Francisco and you need advice that is not covered by reading our travel advice then you can contact us online. If you’re in Northern California, Alaska, Idaho, Montana, Oregon, Washington, or Wyoming and you need urgent help (for example, you’ve been attacked, arrested or someone has died), call +1 415 617 1300