Home to temples, shrines, hikes and the Museum of History & Folklore 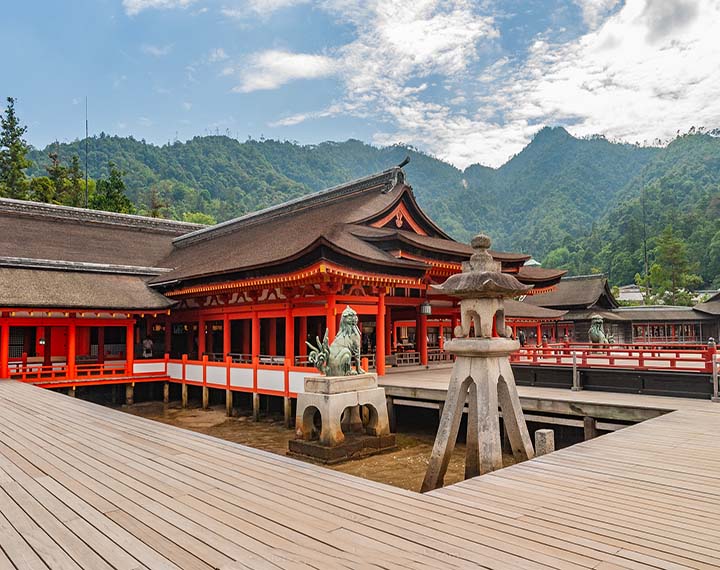 Itsukushima is an island in the western part of the Inland Sea of Japan, located in the northwest of Hiroshima Bay. It is popularly known as Miyajima, which in Japanese means “Shrine Island”. The island is one of Hayashi Gahō’s Three Views of Japan specified in 1643.

For many, the little spiritual island of Miyajima is the sole reason for visiting this part of the world. Not only is it one of the very best highlights in Hiroshima, but also the entire country. Officially, the island shares its name with the home of the island’s star attraction. The giant red torii gate of Itsukushima Shrine standing in the middle of the ocean is one of the country’s most iconic images and considered one of the Three Views of Japan. The island also plays host to wild deer that roam freely and confidently walk amongst visiting humans.

No one knows exactly when the first religious buildings have been erected on Miyajima. These days the earliest records date back to the 6th Century AD. A guy called Saeki Kuramoto is said to have erected a shrine here in 593. The current version of the shrine, however, can be traced back to a reconstruction phase under Taira no Kyomori in 1168. The style is called the Shinden style and can be found in Kyoto as well.

The whole complex of the Itsukushima Shrine consists of 37 buildings and 19 outbuildings on the shore. Due to typhoons and the corrosive salt waters, probably nothing of the old structure remains to this date. However, the buildings and poles have been continuously replaced ever since and the shrine is said to remain virtually unchanged from what it looked like almost 1000 years ago.