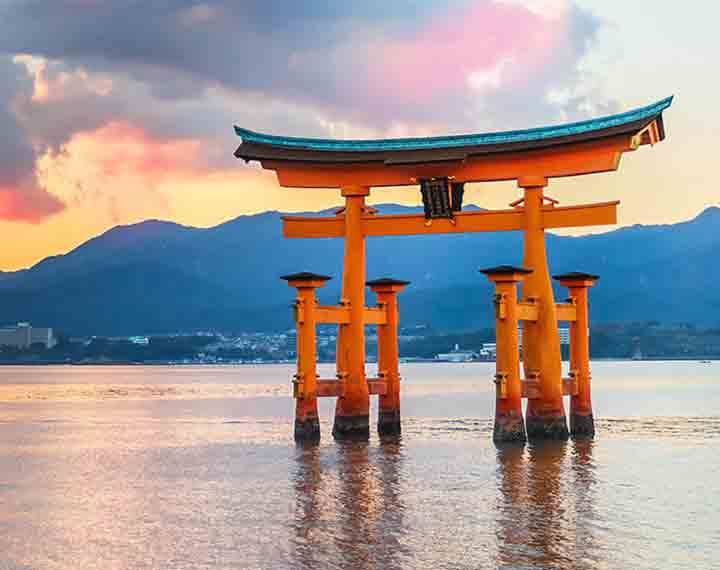 The Island Shrine of Itsukushima

Without a doubt the biggest highlights on Miyajima and Hiroshima alike are right here. Itsukushima shrine was significant enough to give the island its official name. It’s the entire reason Miyajima receives so much attention and is home to one of the most iconic images in Japan. The huge torii gate standing in the shallow ocean waters is famous throughout the world and is synonymous with Japan. Other buildings such as prayer halls and even a stage all appear to float above the ocean during high tide. At low tide, the ocean drains out of the bay, allowing visitors to wander close to the torii gate.

Miyajima, aka “Shrine Island,” is one of Japan’s most important (and most visited) coastal sites. Covering some 30 square kilometers of Hiroshima Bay, the island is famous for the spectacular Itsukushima shrine, dedicated to the Princesses Ichikishimahime, Tagorihime and Tagitsu-hime, daughters of the Shinto wind god Susanoo.

First mentioned in AD 811, the shrine’s buildings rise out of the waters of a small bay supported on piles and, at high tide, appear to float on water, presenting a picturesque and colorful spectacle with their red timber framing and white walls (the buildings are linked by covered gangways). It’s a particularly attractive sight at nighttime.

Highlights of a visit include the Main Hall (Honden) the Offerings Hall (Heiden), the Prayer Hall (Haiden), and the Hall of a Thousand Mats (Senjokaku). You’ll also want to see, at the far end and flanked by two music pavilions, the stage (Takabutai) used for cult dances (Bugaku, Kagura). Dances are performed here during festivals.

Be sure to spend time exploring the island itself. It’s quite lovely to see, and is famous for its exquisite gardens and wild, yet friendly deer. (Note: If you’re planning to visit prior to 2022, you can expect some interruptions due to major renovations at this temple attraction