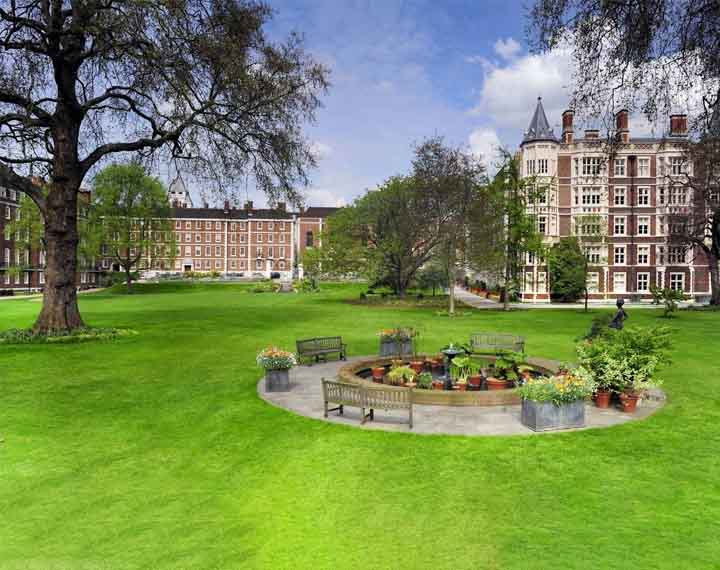 The Garden is usually open to the public on weekdays (excluding bank holidays) from 12.30-3pm. We also take part in several Open Days throughout the year, please see details below. Access is via the main gate opposite the Treasury Office on Crown Office Row. In high winds we close the garden as a precaution.

Visitors are asked to respect their surroundings, take their litter with them and respect any instructions to keep away from certain areas. There are occasions when the garden is closed for private functions, and subsequently for repair and maintenance

References to a garden on this site pre-date the founding of the Inn. The present day layout has evolved over the centuries as land was claimed for building and as the Thames was controlled. Our archives record the first gardener of the Inn to be appointed in 1307.

The mediaeval records describe an orchard; by the 14th Century there are several mentions of its roses (and Shakespeare used it as a setting for the meeting between Richard Plantagenet and John Beaufort which sparked the Wars of the Roses); a more formal design, with a top terrace and walks, was laid out in 1591, and small modifications continued until the early 18th Century when a major re-configuration took place, imposing the then fashionable ‘William and Mary’ Dutch style, enclosed and with three rectangular lawns, dotted with trees and dissected by gravel paths.

The most significant moment for the Garden which still defines the layout today, was the construction of Bazelgette’s Victoria Embankment. The Embankment was formally opened in July 1870 and the wall, railings and carriage gates which still mark the southern edge of the Garden were designed by Bazalgette to give continuity of design with the Garden and the new Embankment. The new Garden layout resulted in the direct access to Garden from the river being lost, though the overall footprint of the Garden was enlarged with land reclaimed from the Thames.

Following this, it was the scheme of Robert Marnock, the pioneering landscape designer, which was adopted. Marnock was renowned for his creation of the Botanical Gardens in Sheffield and Regent’s Park, his style economic and naturalistic. He proposed the planting of the two lines of planes, the most pollutant-resistant of trees, which still stand on either side of the Broad Walk (then known as the south terrace).

It was also during the Victorian era, when the grime and soot of industry made horticulture a struggle, that The Inner Temple began its tradition as host to some of London’s premier flower shows. It was the instigator of an annual show of chrysanthemums – and then in 1888 the Royal Horticultural Society chose the site to stage its Spring Flower Show. They returned each year until 1911 when the shows increasing popularity forced the RHS to find a larger home – the Royal Hospital at Chelsea. The Second World War saw the borders turned over to allotments, and the upper part of the garden became a repository for the rubble from Blitz damage.

Echoes of this long history can be found in today’s garden. The ancient orchard is recognised by a variety of fruit trees, which include a large-fruiting walnut, a quince and a black mulberry. There is a Queen Anne sundial and decorated iron gates which dates from c1730. The avenue of plane trees lining the Broadwalk, planted in the 1870s are as resilient to today’s traffic pollution as they were to the infamous London smogs.

A far more detailed narrative of the history is encapsulated in The Great Garden: A History of the Inner Temple Garden from the 12th to the 21st Century which is available from the Inn Store.