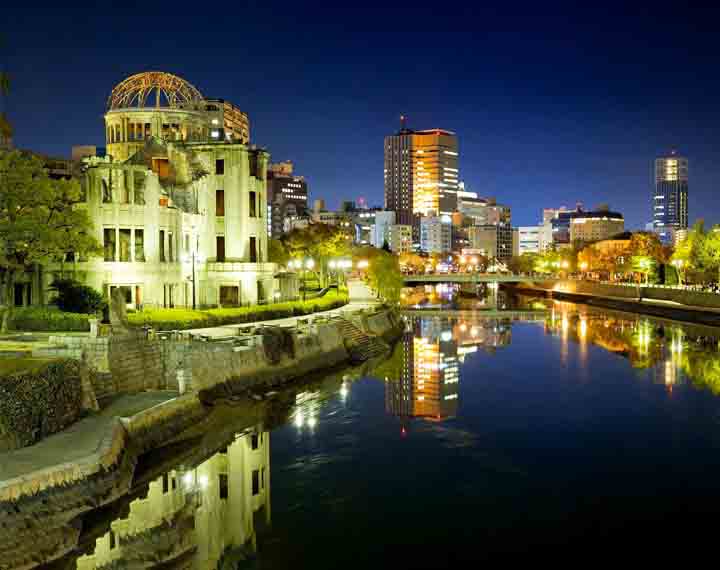 Hiroshima is the capital of Hiroshima Prefecture in Japan. As of June 1, 2019, the city had an estimated population of 1,199,391. The gross domestic product in Greater Hiroshima, Hiroshima Urban Employment Area, was US$61.3 billion as of 2010. Kazumi Matsui has been the city’s mayor since April 2011.

Hiroshima (広島) is the principal city of the Chugoku Region and home to over a million inhabitants. When the first atomic bomb was dropped over Hiroshima on August 6, 1945, the city became known worldwide for this unenviable distinction. The destructive power of the bomb was tremendous and obliterated nearly everything within a two kilometer radius.

Today, the Hiroshima Peace Memorial Park commemorates the 1945 event. In the park are the ruins of the Genbaku Dome, one of the few buildings that remained standing near the impact zone. Other notable sites include Shukkei-en, an elegant Japanese garden, and Hiroshima Castle, a fortress surrounded by a moat and park.

Hiroshima is a popular tourist destination throughout the year, with four distinct seasons and slightly higher than average temperatures than cities in the north of Japan. The best seasons to visit Hiroshima are spring and fall when the weather is most consistently pleasant, and there are ample opportunities for seeing fall foliage and blossoms.

Hiroshima is particularly famous for its spring flowers1, so make sure to catch the flower festival bursting with cultural events to make the most of the season. With the easy accessibility to Miyajima Island, visitors can enjoy some of Japan’s most famous views as the colors change while others head to the dramatic splendor of Sandankyo Gorge to make the most of the changing seasons.

Japanese is the spoken language in Hiroshima. Specifically, the Chūgoku dialect is spoken, so you may notice a few regional differences in accent and phrasing compared with other areas of Japan.

Hiroshima is a relatively large city, but luckily public transport is not an issue with a variety of convenient options to get yourself around, including by:

Hiroshima offers some local delicacies which, due to their ubiquity, visitors would probably chance upon even if they are not particularly searching. Popular dining places in the city include the area around Hiroshima Station and downtown Hiroshima. The following is a list of Hiroshima’s specialty foods:

Hiroshima’s most famous food is its own style of okonomiyaki. The local version of the dish is characterized by only a thin layer of batter and a generous amount of cabbage on top of yakisoba noodles. Popular toppings include oysters, squid and cheese. The dish is completed with bonito flakes, green laver and okonomiyaki sauce. Large numbers of okonomiyaki restaurants are found in Okonomimura and around Hiroshima Station. Diners are typically seated at a counter in front of the chef who prepares the meal on a large griddle.

Hiroshima Prefecture accounts for approximately 60-70% of Japan’s oyster production. Oysters produced in the region are both consumed domestically and shipped overseas. Oysters are offered at many dining establishments in Hiroshima and Miyajima such as restaurants, food stands and ryokan. They are eaten raw with soy sauce or ponzu, deep-fried, baked, grilled or served on top of rice (donburi).

These are cakes baked in the shape of maple leaves with a filling of sweet red bean paste. The famous dessert was created in Miyajima in the early 1900s as a local specialty to represent Momijidani, a popular maple leaf viewing spot. They used to be handmade one by one, but have been machine-made since the advent of momijimanju machines. These days, momijimanju can be found with many different fillings such as matcha, cheese, custard and chocolate. They are sold by many confectioneries on Miyajima, as well as shops in Hiroshima.

Hiroshima-style tsukemen are cold noodles that are dipped into a red pepper sauce before eating and are well known for their spiciness. Customers can usually select the degree of spiciness they would prefer on a scale of one to five (or similar). The bigger the number, the spicier the sauce. The noodles are eaten with a variety of ingredients such as sliced meat, eggs, shredded leek, cucumbers and cabbage.