Chief of the General Staff 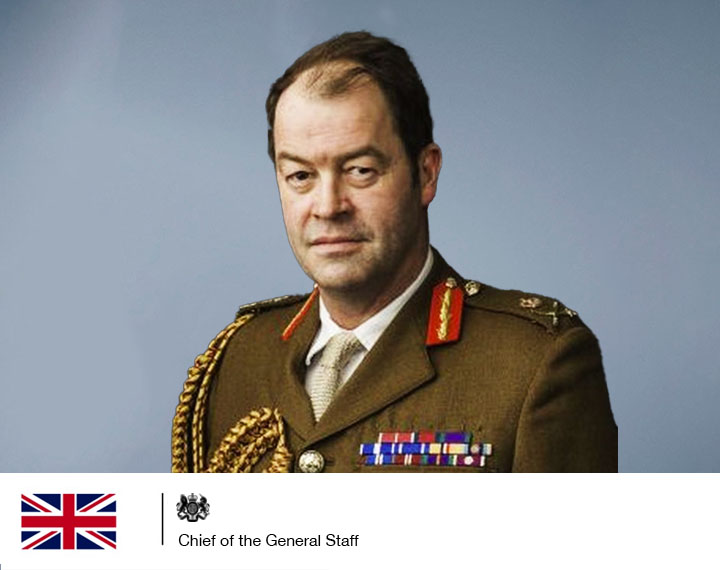 Born in Tidworth Garrison military hospital and raised in Norway, Gibraltar and Iraq, General Sir Patrick Sanders was commissioned in 1986 and spent his early service as an Infantry Officer in The Royal Green Jackets in Germany, Norway and the UK. He has commanded on operations in Northern Ireland, Kosovo, Bosnia, Iraq and Afghanistan.

His staff appointments have been in operational and strategic roles. He has been a member of the Directing Staff at the Joint Staff College, Pol/Mil adviser for the Commander of Coalition Forces in Iraq in 2003-4, Colonel Army Strategy, Chief of Defence Staff’s Liaison Officer to the US Chairman of the Joint Chiefs of Staff, and Assistant Chief of Defence Staff (Operations) in the MOD.

His higher command appointments were 20 Armoured Brigade, the 3rd (UK) Division and the Field Army. He was promoted to General in May 2019 and commanded UK Strategic Command until May 2022. He became Chief of the General Staff in June 2022.

He is Colonel Commandant of The Rifles and the Honourable Artillery Company, and President of the Armed Forces Winter Sports Association. He speaks French and Norwegian, colloquial Spanish and can tell when he is being insulted in Arabic, Pashtun, Dari, Albanian and Serbo-Croat. Married to Fiona Bullen, a successful author, they have made their home in a small Wiltshire village.

General Sanders enjoys cycling, all forms of skiing, shooting and whisky. A season ticket holder with their son Kit, he is a martyr to Tottenham Hotspur FC. He dislikes scotch eggs and can’t bear Arsenal.

Protecting the nation and its dependent territories will always be our first role. Highly trained soldiers are ready to deploy anywhere at any time to meet a variety of challenges. Ranging from support to the Police following a terrorist attack, to specialist capabilities such as bomb disposal and intelligence experts, 24 hours a day 365 days a year, we are always ready to serve.

The Army is distinct from the RAF and Royal Navy in that our tasks are always delivered directly by soldiers through human interaction. They are our greatest asset. We are an inspirational employer who embraces diversity, inclusivity and contributes to society in everything we do. We are leaders in leadership with skills for life and the opportunity for all.

We have to make life-critical decisions and take purposeful action in sometimes hostile, confusing and unclear situations that occasionally test us to the limit of human endurance. Our training, development and preparation is personally rewarding but also ensures we are united by common values and strong bonds and will do the right thing, even under the most difficult circumstances.