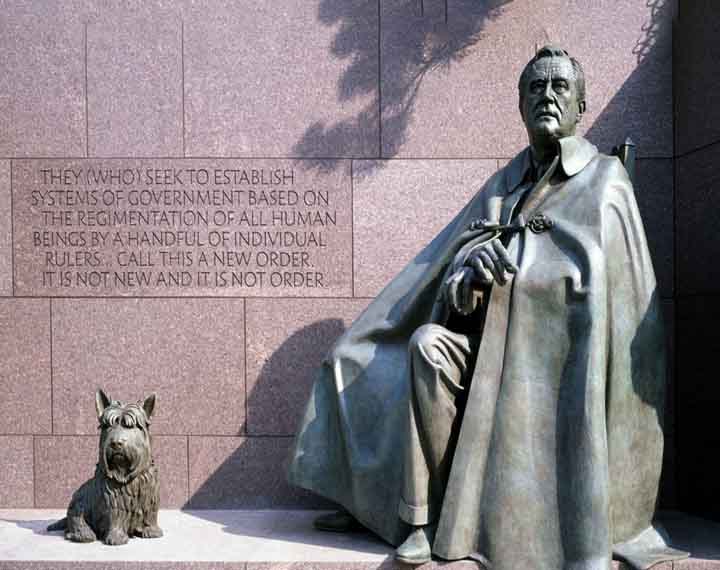 The Franklin Delano Roosevelt Memorial is a presidential memorial in Washington D.C. dedicated to the memory of Franklin Delano Roosevelt, the 32nd President of the United States, and to the era he represents. For the memorial’s designer, landscape architect Lawrence Halprin, the memorial site represents the capstone of a distinguished career, partly because the landscape architect had fond memories of Roosevelt, and partly because of the sheer difficulty of the task.

Dedicated on May 2, 1997 by President Bill Clinton, the monument, spread over 7.5 acres (3.0 ha), traces 12 years of the history of the United States through a sequence of four outdoor rooms, one for each of FDR’s terms of office. Sculptures inspired by photographs depict the 32nd president alongside his dog Fala. Other sculptures depict scenes from the Great Depression, such as listening to a fireside chat on the radio and waiting in a bread line, a bronze sculpture by George Segal. A bronze statue of First Lady Eleanor Roosevelt standing before the United Nations emblem honors her dedication to the UN. It is the only presidential memorial to depict a First Lady.

Considering Roosevelt’s disability, the memorial’s designers intended to create a memorial that would be accessible to those with various physical impairments. Among other features, the memorial includes an area with tactile reliefs with braille writing for people who are blind. However, the memorial faced serious criticism from disabled activists. Vision-impaired visitors complained that the braille dots were improperly spaced and that some of the braille and reliefs were mounted eight feet off of the ground, placing it above the reach of most people.