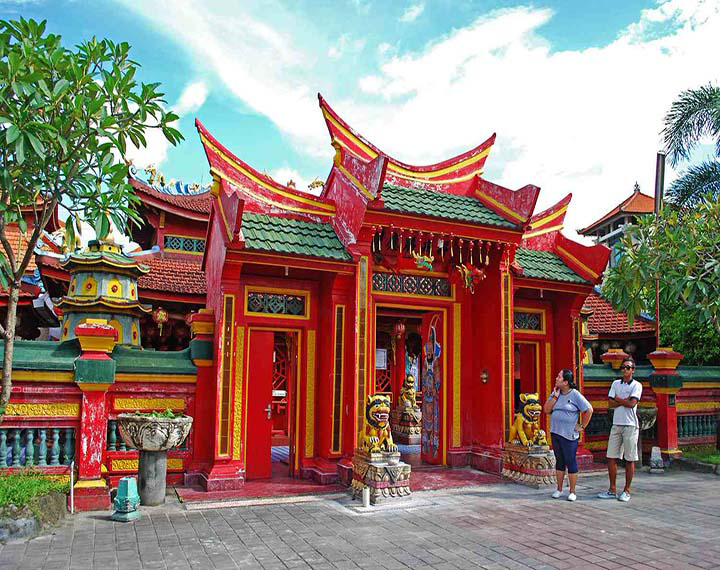 A typical Chinese architecture building stands majestically on the north bank of Tanjung Benoa. The dominant bright red color envelops the worship house of Kong Hu Chu religious people. This house of worship is known as the Caow Eng Bio Temple. This temple is located at Jln. Segara Ening No. 14, Benoa, South Kuta District, Badung Regency. The environment is included in the Banjar Indigenous area of Darmayasa.

Caow Eng Bio Temple is one of the oldest temples in Bali. This temple is dedicated to worshiping Goddess Shui Wei Sheng Nian and Xiongdi Gong or the gods of the sea. The goddess and the gods are only worshiped specifically at temples near the sea and by fishermen or people who work in the field of shipping. Not only is it believed to be the protector of the sea, Dewi Shui and the Xiongdi Gong are also believed to be the protectors of the Hainanese people especially during the Diaspora. Meanwhile, in the teachings of Hinduism who served as the lord of the seas and oceans was the God of Baruna. He is a manifestation of Brahman who holds the title of God of Water.

Then, how can this temple be established in Bali? According to local stories, this temple has existed since the time of the Kingdom of Badung around 1548. The King of Pemecutan Badung gave land to Hainan merchants who sailed to the archipelago to build a temple.