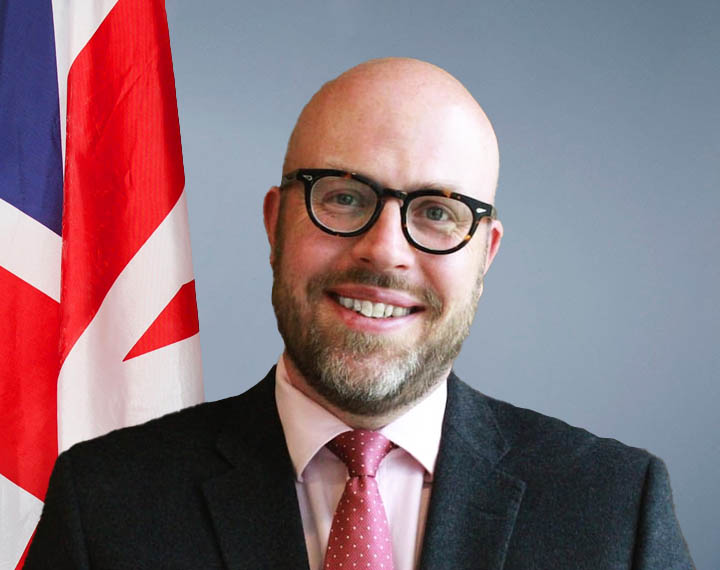 The British Consulate General in Boston maintains and develops relations between the UK and the USA. Our services involve working across political, commercial, security and economic areas of interest to the UK and New England states. The consulate provides consular assistance to British nationals in the New England region.  We provide services to British nationals living in and visiting Massachusetts, Maine, New Hampshire, Vermont, Rhode Island, and Connecticut (except Fairfield County). The British Consulate-General Boston is an outpost of the British diplomatic mission to the United States serving the six New England states. Originally based in Boston proper, the modern Consulate relocated across the Charles River to the Kendall Square innovation district bordering the Massachusetts Institute of Technology.

Dr Peter Abbott has been a member of Her Majesty’s Diplomatic Service since 2005. Before becoming British Consul General to New England in 2020, he served as Counsellor at the British High Commission in Islamabad, Pakistan, with operational oversight of the largest mission in the UK’s overseas diplomatic network. Earlier in his career, Peter was Deputy Head of Mission at the British Embassy in Lisbon. Before being posted to Portugal, Peter covered West Africa, with a particular focus on the emerging threat of terrorism and instability in Mali and the Sahel. Prior to this, he led the Government’s review of the UK counter-radicalisation strategy, Prevent, based in the Office for Security and Counter-terrorism at the Home Office. This followed a posting to the British Embassy in Washington where he was Private Secretary to the Ambassador, Sir Nigel Sheinwald, from 2008-2010.

Before joining the FCDO, Peter lived, studied and worked in the United States, including interning in the office of Dennis Hastert when he was Speaker of the US House of Representatives and working on Arianna Huffington’s 2003 gubernatorial campaign in California. Peter holds a double first class honours degree from the University of Cambridge as well as a PhD in Greek tragedy. He is married with three children. The British Consulate General in Boston maintains and develops relations between the UK and the USA.

Welcome to Peter Abbott OBE British Consulate General Boston VVIP Visitors Guide.  Nearly 300 of Bostons best attractions all GEO Logically organised ensuring the top tourism sites are experienced and seen in the shortest distance. This guide features the best in Boston historical sites, luxurious hotels, landmarks, viewpoints, Universities, fine dinning restaurants, Steakhouses and Oriental cuisine, cafes, museums, art galleries, theatres, parks, walks, river cruises, golf courses and tourism sites. Boston, officially the City of Boston, is the capital and most populous city of the Commonwealth of Massachusetts in the United States and 24th-most populous city in the country. The city proper covers about 48.4 sq mi with a population of 675,647 in 2020, also making it the most populous city in New England.