Striking Cathedral the principal church of the Diocese of Hiroshima 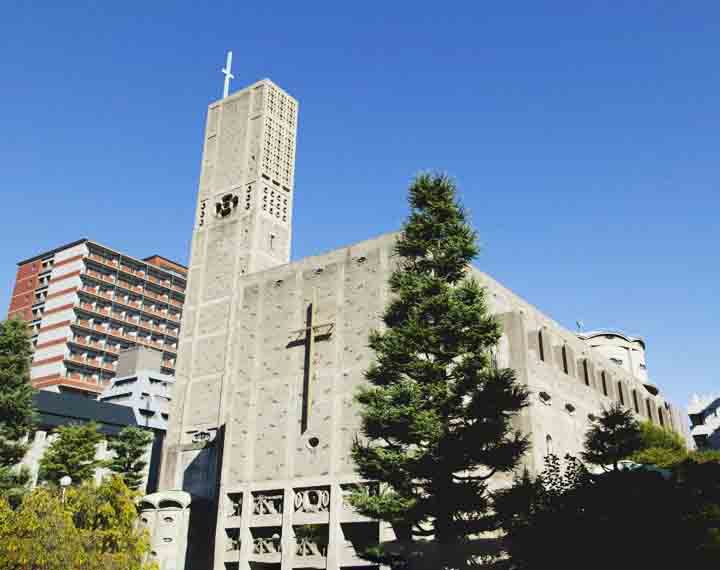 The Assumption of Mary Cathedral also called Memorial Cathedral of World Peace is a religious building affiliated with the Catholic Church. The church was designed by Togo Murano. It follows the Roman or Latin rite and serves as the principal church of the Diocese of Hiroshima  which was created in 1959 with the bull Qui arcano of Pope John XXIII.

One of the largest Roman Catholic churches in Asia, the huge grey Memorial Cathedral of World Peace was built in 1954 on the initiative of a German Jesuit priest named Hugo Lassalle, who had experienced the explosion of the atomic bomb firsthand.

The Assumption of Mary Cathedral or the Memorial Cathedral of World Peace is a catholic church built as a tribute to the victims of war and the nuclear bomb. The church was constructed by Father Enomiya Lassalle, who himself was exposed to the atomic bomb. The church had the special distinction of a visit from Pope John Paul II during his tour of Japan in 1981.

Officially designated as the Assumption of Mary Cathedral, it was designed by leading Japanese architect Murano Togo. The building was largely paid for by contributions made by numerous countries and stands as testament to the ability of nations to work together when necessary.

A highlight of a visit includes seeing the cathedral’s four bells in the 46-meter-high tower, presented by the German town of Bochum. Other notable features include the splendid organ provided by the city of Cologne, the bronze doors from Düsseldorf, and the altar presented by Belgium. If time allows, consider popping in during daily mass.