US Secretary of State 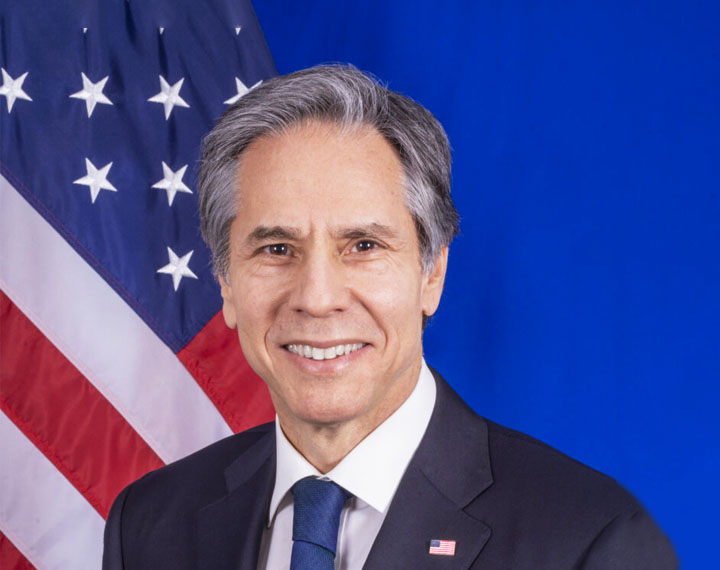 Antony J. Blinken is the 71st U.S. Secretary of State.

He was nominated by President Biden on November 23, 2020; confirmed by the U.S. Senate on January 26, 2021; and sworn in by Vice President Kamala Harris the following day.

Over three decades and three presidential administrations, Mr. Blinken has helped shape U.S. foreign policy to ensure it protects U.S. interests and delivers results for the American people. He served as deputy secretary of state for President Barack Obama from 2015 to 2017, and before that, as President Obama’s principal deputy national security advisor. In that role, Mr. Blinken chaired the interagency deputies committee, the main forum for hammering out the administration’s foreign policy.

US Department of State

The U.S. Department of State leads America’s foreign policy through diplomacy, advocacy, and assistance by advancing the interests of the American people, their safety and economic prosperity. The U.S. Department of State has grown significantly over the years. The first Secretary of State, Thomas Jefferson, oversaw a small staff of one chief clerk, three other clerks, a translator, and a messenger. They maintained only two diplomatic posts, in London and Paris, as well as 10 consular posts. More than 230 years later, the Department’s workforce includes some 13,000 members of the Foreign Service, 11,000 Civil Service employees, and 45,000 locally employed staff at more than 270 diplomatic missions worldwide. Our role has also changed in response to changing global circumstances. At one time, the State Department was responsible for a number of domestic duties ranging from publication of the census to control of copyright to management of the Mint. We now work to fight terrorism, protect U.S. interests abroad, and implement foreign policy initiatives while building a more free, prosperous, and secure world. Explore our other websites for a more in-depth look at the State Department’s history and the impact of our work through the years and today.

Serves as the principal deputy, adviser, and alter ego to the Secretary of State; and assists the Secretary in the formulation and conduct of U.S. foreign policy and in giving general supervision and direction to all elements of the Department.