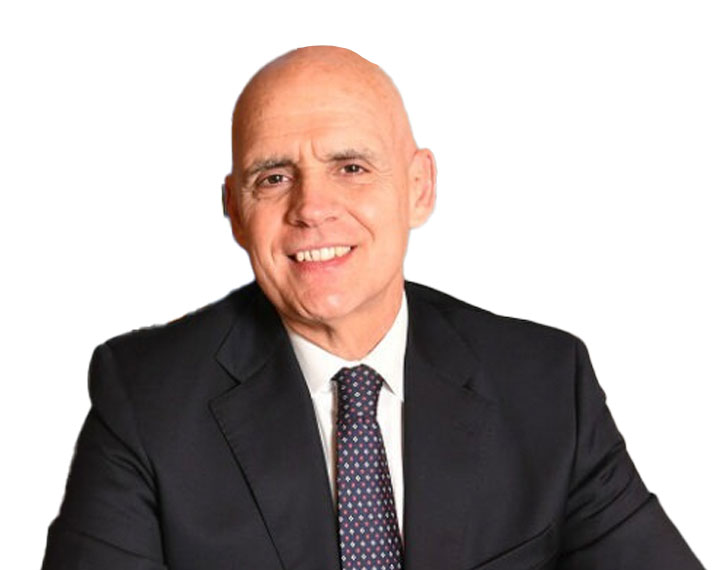 Born in Naples on 23 April 1960, he is married and has two children. He graduated in Political Science on 28 February 1983 at the  University of Naples and obtained a Master’s degree in European Studies from the London School of Economics. He entered the diplomatic service on 1 February 1985. On 1 January, 1986 he was appointed Secretary of Legation at the Office XIV of the Department of Development Cooperation.

On 8 December 1990, he was appointed Consul in London.

On 9 January 1995, he was transferred to the Secretariat of the Directorate General of Economic Affairs, where he was appointed Chief of Staff on 22 February, 1995.

On 1 May 1995, he was appointed Counsellor to the Legation; in this rank, he served in the Cabinet Secretariat of the Minister.

On 18 September 1997, he was appointed Chief of Staff of the Secretary General of the Ministry of Foreign Affairs.

On 14 December 1998, he went to Brussels in the capacity of Counsellor to the Permanent Mission of Italy to the European Union. In this position, he was appointed Counsellor of Embassy on 2 July 2000.

On 26 October 2000, he was confirmed First Counsellor in the same Mission.

On 10 August 2002, he was appointed Deputy Head of Mission in Beijing.

On 3 July 2006, he became the Head of the Cabinet Secretariat of the Undersecretary of State. In this position, he was appointed Plenipotentiary Minister on 2 January 2007.

From 1 January to 15 December of 2010, he served as Acting Director General of the same Directorate General.

On 7 January 2013, he was appointed Italian Ambassador to Brazil.

In 2011, was conferred the insignia of Commander (Commendatore) of the Order of Merit of the Italian Republic.

On 1 April 2015, he was also accredited to Paramaribo (Suriname) with the credentials of Ambassador.

On 1 January 2016, he ascended to the rank of Ambassador.

Since 6 June 2016, he serves as Head of the Cabinet Secretariat of the Minister.

In January 2017, was appointed Personal Representative and Sherpa of the President of the Council of Ministers for the G7 and the G20.

Proficient in the following languages: English/French/Portuguese/Spanish

The Italian Embassy in London is one of the most important Italian bilateral embassies in the world. The Head of mission is Ambassador Raffaele Trombetta.

On the basis of the Vienna Convention on Diplomatic Relations of 18 April, 1961, the embassy’s functions include the following:

• Represent Italy in the United Kingdom of Great Britain and Northern Ireland;

• Safeguard the interests of Italy and its citizens, within the limits set by international law;

• Negotiate with the government of the United Kingdom of Great Britain and Northern Ireland;

• Gather information, by any legal means, on conditions and events in the United Kingdom and report back to the Italian State;

• Promote friendly relations and develop economic, cultural and scientific collaborations between Italy and the United Kingdom.

This Embassy coordinates a network comprising two consulates (London and Edinburgh), two cultural institutes (London and Edinburgh), an Italian Trade Agency Office and an Italian National Tourist Board Office. The Embassy comprises a number of departments, staffed by personnel of the Italian Ministry for Foreign Affairs and International Cooperation as well as by staff from other ministries and public institutions.

The Italian consulates in London and Edinburgh provide a range of consular services to both Italian and foreign nationals who live in the consulates’ respective catchment areas.

The Italian Embassy at No. 4 Grosvenor Square is a fascinating place, with a magnificent art collection and a lively history. The land occupied today by the square and the surrounding area were once part of the manor of Ebury, which belonged to Westminster Abbey and later became the property of the Crown.

James I sold the land in 1623 to private purchasers, and then in 1626 the manor of Ebury was bought by Hugh Audley, who left it to his wife, Mary Davies, upon his death. She later married Sit Thomas Grosvenor, whose son, Sir Richard, began developing the area around 1710. Sir Richard’s plans were ambitious. He wanted Grosvenor Square to be one of the largest in London, extending over six acres and bordered on all four sides by imposing, elegant buildings.

The east side, where the Italian embassy is located, was originally designed by the Scottish architect Colen Campbell (1676-1729), but his ideas were never transformed into reality. A drawing by Campbell, in which the Neo-Palladian nature of his project, is held by the Ashmolean Museum in Oxford. It is unclear why Campbell’s plan was discarded, but work began on the site in 1725 under the direction of John Simmons. No.4, whose location in the centre of the east side made it the most important house on that side, was finished in 1728, and the construction of the whole group of seven houses was completed by 1735.

No. 4 was larger than the other buildings and its façade had a prominent central section crowned with a pediment. Some of the decorative elements were repeated on the end houses, giving the impression that the row of houses was a single palatial building. Despite the exceptional location and the beauty of the architecture, No. 4 failed to sell, until Simmons took the unusual measure of making it a raffle prize in June 1739.

The new owner was Francis Howard, 1st Earl of Effingham, who rented it to Edward Howard, 9th Duke of Norfolk, who lived in it until 1741. In February 1742 Lord Effingham sold the house for £5,500 to Thomas Watson-Wentworth, Earl of Malton, later 1st Marquess of Rockingham, who carried out major renovations to the building, notably changing the layout of the interior and adding plastered ceilings.

His son, Charles, 2nd Marquess of Rockingham and prime minister in 1765 and in 1782, lived at No. 4 Grosvenor Square from 1751 to his death in 1782. He bequeathed it to his nephew, William Wentworth, 4th Earl Fitzwilliam, who lived there for fifty years. Lord Fitzwilliam was an important politician of his time. He held the post of Lord Lieutenant of Ireland in 1795 for just eight days before being dismissed by prime minister, William Pitt, who was annoyed by his intention to implement the Catholic Emancipation immediately. Lord Fitzwilliam invested large sums of money in the house, spending £3,986 in 1785 alone.

The Fitzwilliams renovated the house again in 1872 and in 1902, adding an extra floor and a rear extension connecting to the buildings on Three Kings Yard, where the Chancery is today. In 1931 the 7th Earl Fitzwilliam surrendered the lease back to the Grosvenors, and on the 25th of March of the same year Hugh Grosvenor, Duke of Westminster, granted a 200-year lease to the Italian state.