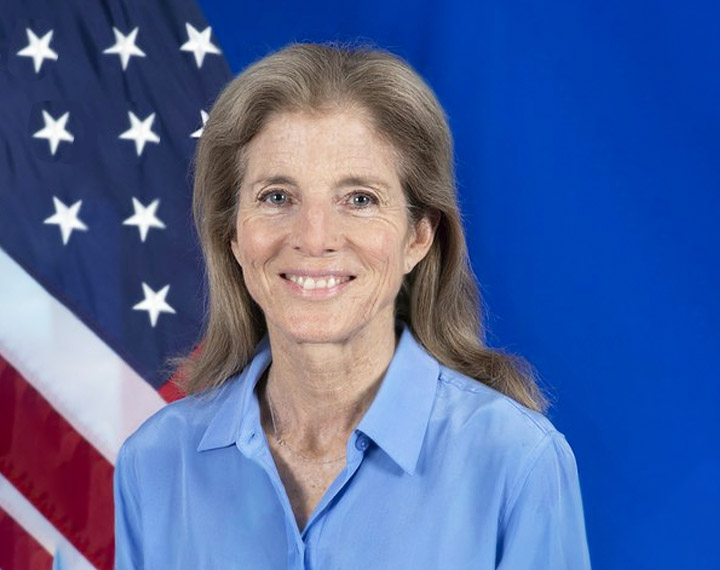 Caroline Kennedy is currently the United States Ambassador to Australia. She previously served as the U.S. Ambassador to Japan from 2013 – 2017. In recognition of her efforts to strengthen the U.S.-Japan alliance, in November 2021 the Japanese government awarded her the Grand Cordon of the Order of the Rising Sun, the highest honor for which foreigners are eligible.

Ambassador Kennedy is the author or editor of eleven best-selling books on constitutional law, American history, politics and poetry. A graduate of Harvard University and Columbia Law School, she is Honorary President of the John F. Kennedy Library Foundation and a member of the John F. Kennedy Profile in Courage Award Committee.

The John F. Kennedy Presidential Library and Museum is dedicated to the memory of our nation’s thirty-fifth president and to all those who through the art of politics seek a new and better world. Located on a ten-acre park, overlooking the sea that he loved and the city that launched him to greatness, the Library stands as a vibrant tribute to the life and times of John F. Kennedy.

Come tour our Museum which portrays the life, leadership, and legacy of President Kennedy, conveys his enthusiasm for politics and public service, and illustrates the nature of the office of the President.  Students and scholars can also arrange to conduct research using our collection of historical materials chronicling mid-20th century politics and the life and administration of John F. Kennedy.

Honorary President Caroline Kennedy VVIP Guide is Geo Logical so starting from the JF Kennedy Museum all the top attractions in Boston are prioritised and visited in the shortest distance. This VVIP Guide features the most popular touristic attractions, including all sixteen historical sites on the Freedom Trail. All the top rated museums, art galleries, theatres, luxurious hotels, historical sites, Boston famous landmarks, the most beautiful parks, gardens, and the best in fine dining cuisine, steakhouses, cocktail, wine bars, rooftop viewpoints, and roaster cafes. In summary we commence at JF Kennedy Presidential Library and Museum, we head to South East to the beautiful and scenic Boston Waterport Hotel District, then North to the Artist and theatre district, West to Frederich Douglass Historical District, North across the Charles river to into the Harvard District including the Office of the British Consulate General, then South again across the Charles River to explore Boston Common, then East to the Government District including the office of the Mayor and Governor, we continue East to Historical Boston District to explore all sixteen historical sites on the world famous Boston Freedom Trail then South to Boston Waterfront for a a river cruise to tour Boston 34 Islands National Park, then finally we complete, and close the Boston tourism and adventure loop by visiting the cafes and restaurants of Boston Downtown, the Financial District and Church Green Buildings Historical District before driving through the Ted William Tunnel into East Boston to depart from Boston Logan International Airport.Boston, officially the City of Boston, is the capital and most populous city of the Commonwealth of Massachusetts in the United States and 24th-most populous city in the country. The city proper covers about 48.4 sq mi with a population of 675,647 in 2020, also making it the most populous city in New England. We wish you an amazing and exciting cultural historical adventure during your stay in Boston.