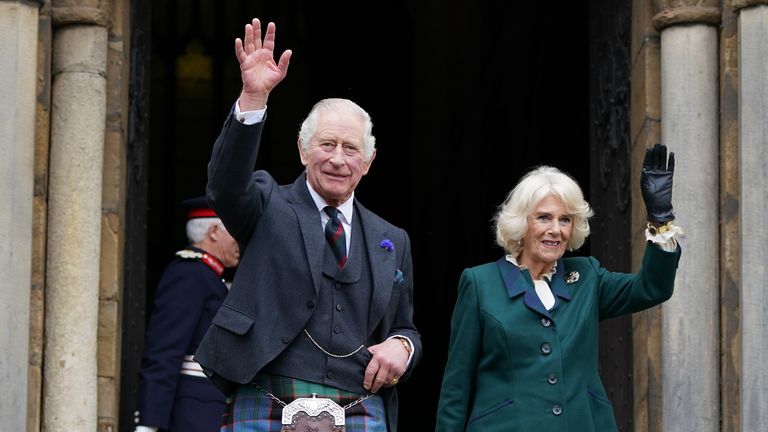 The coronation of King Charles III will take place on Saturday 6 May with a bank holiday on Monday 8 May. The ceremony is set to be shorter than the one for his mother in 1953 and will “reflect the monarch’s role today and look towards the future”.

A coronation is both the symbolic religious ceremony during which a sovereign is crowned and the act of placing a crown on a monarch’s head. It formalises the monarch’s role as the head of the Church of England and marks the handing over of title and powers to them. Coronations have remained much the same for more than 1,000 years and it is the only remaining ceremony of its type in Europe. Peers will wear suits and formal dresses as opposed to ceremonial robes and many of the traditional rituals, including the presentation of gold ingots, will not feature this time.

The Coronation of His Majesty The King and Her Majesty The Queen Consort will take place at Westminster Abbey on Saturday 6th May, 2023. The Service will be conducted by the Archbishop of Canterbury. As previously announced, the Service will reflect the Monarch’s role today and look towards the future, while being rooted in longstanding traditions and pageantry.

Across the Coronation Weekend, there will be further opportunities for people to come together in celebration of the historic occasion. On Sunday, 7th May 2023, a special Coronation Concert will be staged and broadcast live at Windsor Castle by the BBC and BBC Studios, with several thousand pairs of tickets to be made available via public ballot.

The Coronation Big Lunch, at which neighbours and communities are invited to share food and fun together, will take place across the country on the same date. On Monday, 8th May 2023, members of the public will be invited to take part in The Big Help Out, which will encourage people to try volunteering for themselves and join the work being undertaken to support their local areas.

Their Majesties The King and The Queen Consort hope the Coronation Weekend will provide an opportunity to spend time and celebrate with friends, families and communities across the United Kingdom, the Realms and the Commonwealth. Their Majesties are looking forward to marking the occasion with the public throughout 2023.

The Coronation Service at Westminster Abbey

The Coronation Service will take place on the morning of Saturday, 6th May 2023 at Westminster Abbey. The Coronation is a solemn religious service, as well as an occasion for celebration and pageantry.

Their Majesties The King and The Queen Consort will arrive at Westminster Abbey in procession from Buckingham Palace, known as ‘The King’s Procession’.

At Buckingham Palace, The King and The Queen Consort, accompanied by Members of the Royal Family, will appear on the balcony to conclude the day’s ceremonial events.

The Coronation Concert at Windsor Castle

Attended by a public audience including volunteers from The King and The Queen Consort’s many charity affiliations, the concert will see a world-class orchestra play interpretations of musical favourites fronted by some of the world’s biggest entertainers, alongside performers from the world of dance. The performances will be supported by staging and effects located on the Castle’s East Lawn and will also feature a selection of spoken word sequences delivered by stars of stage and screen.

Through a national ballot held by the BBC, several thousand members of the public will be selected to receive a pair of free tickets for the Coronation Concert at Windsor Castle.

Alongside the stars of the concert, the show will also see an exclusive appearance from The Coronation Choir. This diverse group will be created from the nation’s keenest community choirs and amateur singers from across the United Kingdom, such as Refugee choirs, NHS choirs, LGBTQ+ singing groups and deaf signing choirs. A new documentary exploring the formation of The Coronation Choir will tell the stories of the people representing the many faces and voices of the country. The Coronation Choir will appear alongside The Virtual Choir, made up of singers from across the Commonwealth, for a special performance on the night.

The centrepiece of the Coronation Concert, ‘Lighting up the Nation’, will see the country join together in celebration as iconic locations across the United Kingdom are lit up using projections, lasers, drone displays and illuminations.

The Coronation Concert will be produced by BBC Studios, broadcast live on BBC One, BBC iPlayer, BBC Radio 2 and BBC Sounds.

Further details about the concert, the national ticket ballot and the line-up will be released in due course.

Neighbours and communities across the United Kingdom are invited to share food and fun together at Coronation Big Lunches on Sunday 7th May 2023, in a nationwide act of celebration and friendship. From a cup of tea with a neighbour to a street party, a Coronation Big Lunch brings the celebrations to your neighbourhood and is a great way to get to know your community a little better.

The Coronation Big Lunch will be overseen and organised by the Big Lunch team at the Eden Project. The Big Lunch is an idea from the Eden Project, made possible by The National Lottery, that brings millions of people together annually to boost community spirit, reduce loneliness and support charities and good causes. Her Majesty The Queen Consort has been Patron of the Big Lunch since 2013.

Thousands of events are expected to take place in every corner of the United Kingdom this May as people take to their streets, gardens, parks and community spaces to join the Coronation celebrations and mark this historic occasion.

Free downloadable resources will also be made available online by the Big Lunch team at CoronationBigLunch.com, to help people and communities start their Coronation Big Lunch planning.

The Big Help Out

The Big Help Out will be held on Monday, 8th May 2023 and is being organised by The Together Coalition and a wide range of partners such as The Scouts, the Royal Voluntary Service and faith groups from across the United Kingdom. The Big Help Out will highlight the positive impact volunteering has on communities across the nation.

In tribute to His Majesty The King’s public service, The Big Help Out will encourage people to try volunteering for themselves and join the work being undertaken to support their local areas. The aim of The Big Help Out is to use volunteering to bring communities together and create a lasting volunteering legacy from the Coronation Weekend.

In a statement, Buckingham Palace said: “The coronation will reflect the monarch’s role today and look towards the future, while being rooted in longstanding traditions and pageantry.”

There are typically six stages to the service:

The Queen Consort will then be anointed in the same way and crowned.

The coronation is a state occasion, which means the government has control of the guest list. In addition to the Royal Family, it will be attended by the prime minister, representatives from the Houses of Parliament, heads of state, and other royals from around the world.

A total of 8,251 guests attended Queen Elizabeth II’s coronation, but Westminster Abbey had to be closed for five months to allow extra seating to be built. The normal capacity is about 2,200 and it seems likely that this will be the maximum number this time.

After the ceremony, the King and Queen Consort will be joined by other family members on the balcony of Buckingham Palace to conclude the day’s ceremonial events.

The King will be crowned with the solid gold 17th Century St Edward’s Crown. It is exceptionally heavy and only used at the moment of crowning – Queen Elizabeth II wore it just once in her lifetime, for her own coronation.

Thousands of members of the public will be selected to receive a pair of free tickets, which are up for grabs through a national ballot held by the BBC, which will also broadcast the event live.